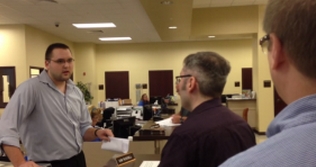 One month after their video of a Kentucky clerk refusing to issue a marriage license went viral, gay partners David Ermold and David L. Moore returned to that same government office, cameras in tow, and filmed yet another rejection.

In early July, the couple captured video of Rowan County Clerk Kim Davis declining to give them a license because she “worried about [her] own soul.” Davis has sued the state’s governor, alleging that the obligation to issue same-sex marriage licenses under the recent Supreme Court decision is directly in violation of her “religious freedom.”

As such, her office has actively resisted giving out such licenses, under guidance from conservative Christian non-profit Liberty Counsel.

Despite there being no legal stay on the issuing of marriage licenses, Davis’ employees refused to issue Moore and Ernold a license upon their return on Thursday morning. The clerk herself was on vacation.

Moore and Ernold have been partners for 17 years. The Supreme Court of the United States ruled on June 26, 2015, in a 5-4 decision, that states do not have the right to ban the official state-sanctioned marriage of same-sex couples.

Watch the couple’s second visit below:

Next [Video] Mother takes Child to the store and instructs her to steal, what she steals is the worst part