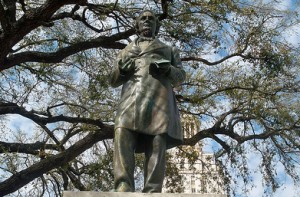 The president of the University of Texas at Austin announced Thursday that the university would be moving a centrally-located statute of Confederate President Jefferson Davis.

“After reviewing that report and hearing from many members of the university community, including our alumni and the public, I have decided that the best location for the Jefferson Davis statue is UT’s Briscoe Center for American History,” president Gregory L. Fenves said in a statement. “While every historical figure leaves a mixed legacy, I believe Jefferson Davis is in a separate category, and that it is not in the university’s best interest to continue commemorating him on our Main Mall.”

UT-Austin will also be removing a statute of former Democratic President Woodrow Wilson. While Fenves claims the move will be made to retain the symmetry of the Main Mall, it’s worth noting Wilson was pretty darn racist himself. The statues of Confederate generals Albert Sidney Johnston and Robert E. Lee will remain on the Main Mall.

The decision comes after the Davis statute was vandalized with the words “black lives matter” back in June. A memorial to the Confederate dead on the University of North Carolina’s campus and a Jefferson Davis statute in Virginia were also both vandalized by Black Lives Matter protesters.

Next Megyn Kelly Snarks At Cruz Before Debates, . . . Takes A "Vacation" After Debates, And "Doing" Good Journalism