Arizona Senator John McCain (R-AZ) has made his fair share of enemies on both ends of the political spectrum and now he has made a new enemy, the Navajo people of Arizona.

But the recent spill of millions of gallons of contaminated wastewater into the Animas and San Juan Rivers by a contractor doing work for the U.S. Environmental Protection Agency ended up being the focus for the tribal leaders.

“I keep saying when are we going to hear from the White House? Not a word,” Begaye said, according to Native News. “When somebody wins the Super Bowl or an NBA Championship, they get a call, right? And when something like this happens and people are suffering, nothing.”

“This is just one mine out of hundreds and there’s no Superfund designation,” Vice President Nez said. “Right now, we don’t trust the U.S. EPA’s data and their collection.”

Video purports to show protesters “chasing McCain off the Navajo Nation” while they yelled “get off our land.”

Dusty’s Navajo Political Sphere, a man’s Facebook account that includes political and community news from the Navajo Nation, wrote that 60 or so protesters went after McCain and Navajo Nation leaders when they went to “attend a secret meeting.” 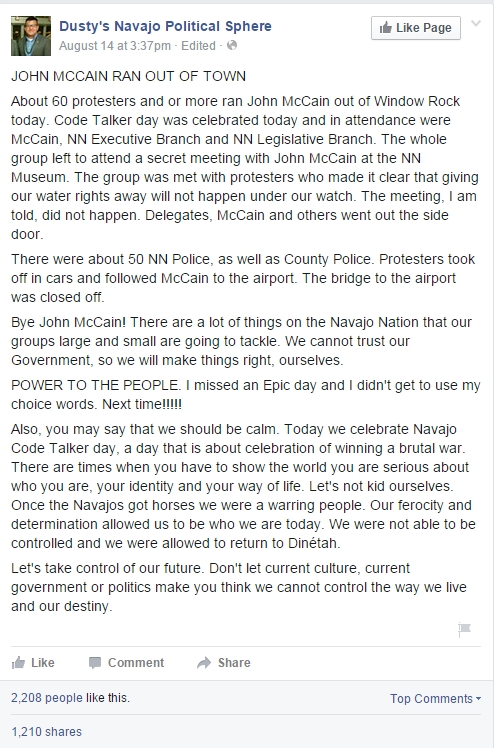 KPNX-TV reported that protesters held signs that read “McCain = Indian Killer” and “McCain’s Not Welcome Here” as they stood outside the museum. The news station recorded a woman shouting “No making deals behind closed doors … we need our water.”

You can watch KPNX’s report below:

Next Sin City Has Dark Secrets. But None Are Disheartening As This One.