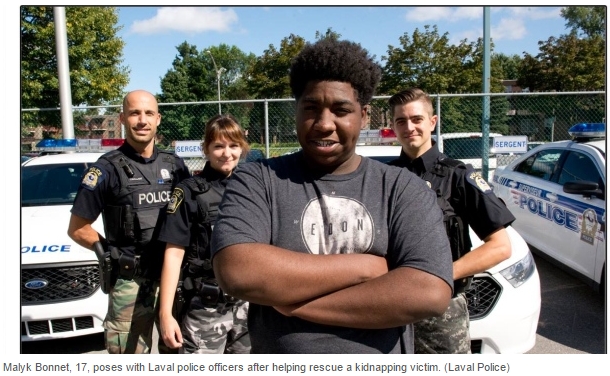 Police say 17-year-old Malyk Bonnet Canadian boy could have very well saved a woman’s life after he called 911 on her would-be abductor.

CBC reports Bonnet was waiting for his bus to go home after work on August 1st when he noticed a couple fighting.

“The guy was screaming at her, the girl,” Bonnet said. “He wasn’t really gentle with her, and I started watching, because I thought he would hit her, so I approached them a little bit.”

Bonnet said the couple asked him for money to ride the bus to Laval, Quebec. He got some change from a convenience store and had a moment alone with the woman, who seemed terrified.

The quick-thinking teen came up with a plan. Although he really lived in Montreal, he told the couple he also lived in Laval and that he would accompany them on the bus.

“My plan was to keep them in a public place, where there’s a lot of people,” Bonnet said. “I decided to make myself friendly with the man, so he would trust me. So I played my game.”

What Bonnet didn’t realize was just how dangerous his “game” was. As it turns out, police had already been looking for the couple. 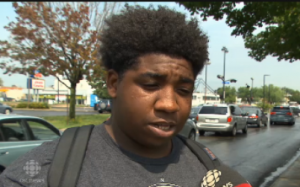 “We were looking for a 29-year-old woman who was kidnapped by her former boyfriend earlier that day, and we believed that man was very dangerous,” said Laval police Lt. Daniel Guerin.

Guerin added that the man had already been found guilty of assault and had threatened the woman’s life last year. He was ordered to keep his distance from her, according to reports.

Still, Bonnet played along. He earned the man’s trust and offered to take the couple to a Tim Hortons. He even gave the man $50 to buy food.

Bonnet’s plan almost came to a screeching halt when his cellphone battery died. He then pretended to go to the restroom and borrowed someone’s cellphone to call police.

“He was really surprised, he didn’t know that it was me,” Bonnet said of the man. “So I played my game right.”

Bonnet said the would-be victim didn’t say anything, but he remembered the look on her face when police arrived at the scene.

“She was almost crying,” he said. “She was so happy, so happy not to be with him.”

The man was arrested and charged with kidnapping, forcible confinement and assault.

Bonnet said he never feared for his safety.

“The guy was really tiny, so if he had something to do I would kick his ass,” Bonnet said.

Police were so impressed with Bonnet’s bravery that they came together to reimburse him for all the money he spent during his strategic rescue mission. They came up with $255.

“He managed the situation very well and took good decisions that probably saved the life of this woman,” said Guerin, adding that he’s never seen anything in his 24-year career quite like what Bonnet did.

Police also intend to nominate the young man for a provincial award for bravery.

The man was reportedly placed under arrest and appeared in court on charges of kidnapping, forcible confinement and assault.

Next [WATCH] Woman Is Kicked Off Plane By United Express, Video Goes Viral