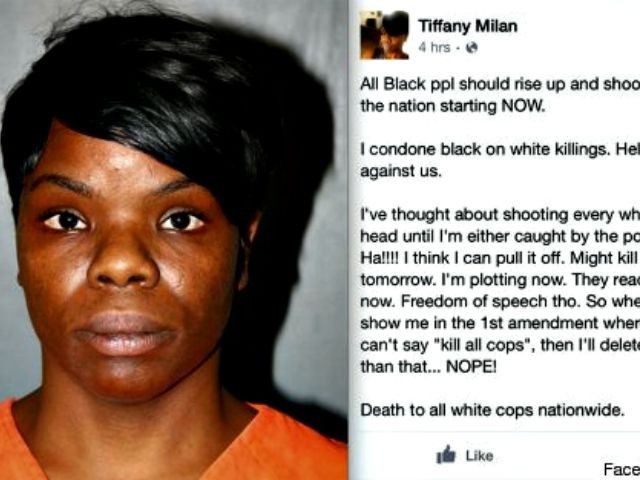 On Friday, Ebony Dickens of East Point, Georgia was indicted on charges of making terroristic threats and inciting a riot after having been arrested last April for using a Facebook pseudonym to post threats of killing “at least 15” white policemen.

All Black ppl should rise up and shoot at every white cop in the nation starting NOW. I condone black on white killings. Hell they condone crimes against us. I’ve thought about shooting every white cop I see in the head until I’m either caught by the police or killed by them. Ha!!!! I think I can pull it off. Might kill at least fifteen tomorrow. I’m plotting now. They reading this shit too right now. Freedom of speech tho. So when you can absolutely show me the 1st amendment where it explicitly says you can’t say “kill all cops,” then I’ll delete my status. Other than that…NOPE! Death to all white cops nationwide.

According to 11Alive, when City Solicitor Antavious Weemes asserted that Dickens had a criminology degree, public defender Tracey Moran insisted Dickens’ had a masters degree in “legal studies”.

Part of Dickens’ $10,000 bond agreement is that she is forbidden from using any form of social media.


In pure criminal lawyer fashion, Moran protested that Dickens meant no harm, saying, “My client was simply venting. . . it was a horrible mistake. The chance of her doing this again is highly improbable.”