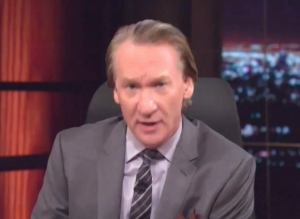 Bill Maher decided at the end of his show that even though Hillary Clinton is still the most likely candidate to get the Democrat nomination, he couldn’t stand idly by and watch her positive points take a free fall from recent events.

Maher pulled out a Donald Trump-esque description to her recent poll numbers and campaign performance, while also saying that Clinton really should “hit the blowhard as hard as he hits.” He went on to say that her recent speeches about policy are well and good, but reminded her that this is America, where its far more important to make her campaign fun and interesting than to it is to talk about matters relevant to being president

Maher had several suggestions about how Clinton could liven things up and making herself appear as a “spontaneous fun-lover.” The suggestions ran from running the gamut of celebrity interaction, to picking Toya Graham (The lady who went viral for slapping her son in the Baltimore riots) as her VP.

Of course, Maher also pointed out that what Clinton really needs to is do cash in more on Bill‘s recognition. As far as Maher saw though, the best way of doing this was by Mr. Clinton having another affair so that she could recapture the magic she had in the 90s.

You can watch here, via HBO:

Next [WATCH] When This Dying Veteran Lost His Service Dog, He Was Heartbroken. But Then He Got This Message.