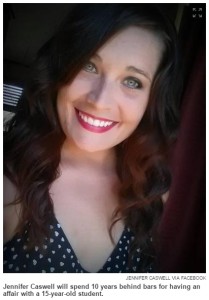 A former Oklahoma middle school teacher has pleaded guilty to 6 counts of rape, child enticement and forcible sodomy after having a sexual relationship with a 15-year-old student.

Jennifer Caswell, 29, was sentenced to 15 years in prison with five years suspended, and will not be eligible for parole until she has served 8-1/2 years of her sentence. She will also have to register as a sex offender after she is released.

Caswell’s attorney, David Cummins, said that he was surprised by the severity of the punishment handed down by Harmon County District Judge Richard Darbym, however, the teenage victim’s mother said that the sentencing is fair.

In May, Caswell appeared on an episode of the Dr. Phil show and defended her reputation and her illicit relationship with the teenager, stating “I’m not a monster and I’m not a predator, I made a stupid decision.”

Caswell, who has since divorced her husband, said that the teenager gave her more attention than her husband did.

The former teacher maintained that the victim pursued her at a time when she was vulnerable. She also said that the relationship with the student was consensual.

“I was in a very unhappy marriage and I received little to no attention from my husband,” Caswell said in a police report. “While working at Hollis Public Schools I started receiving attention from a student. I reacted poorly and irresponsibly.”

On top of jail time, Caswell is also fighting a federal lawsuit.

The victim’s father, a pastor, is also suing Caswell, the Hollis School District, the Board of Education, the school principal and the district superintendent for allegedly covering up the affair and allowing Caswell to keep her teaching credentials if she quit her job, the lawsuit said.

The father seeks $1 million in damages, claiming that his son has isolated himself. He faulted school officials for neglecting to notify him or police when two witnesses said they saw Caswell and his son engaging in inappropriate behavior, according to the suit.

Next [PHOTOS] Man Caught Picking up Prostitutes on Google Maps...