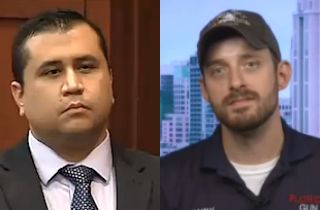 If there were a game for headlines called “Buzzword Scrambler,” this story could be solid competitor. Nonetheless, George Zimmerman, the man who became a pariah after killing Trayvon Martin, is teaming up with the controversial owner of the Muslim-Free gun store in order to sell signed prints of his take on the Confederate Flag.

Zimmerman’s joint venture with Andrew Hallinan comes one month after the latter drew national attention after responding to the Chattanooga Shooting with a video saying, “I will not arm and train those who wish to do harm to my fellow patriots.” Zimmerman decided to team up and split the revenue for their legal fees after hearing that Hallinan was being sued by the Council on American Islamic Relations (CAIR).

“The caption, ‘the second protects the first’ is a double entendre,” Zimmerman said to Hallinan. “The 2nd flag I painted was the Battle Flag — which we need in America in order to protect the first.”

An ad on Florida Gun Supply website states that anyone who buys a print will be entered to win the original painting of Zimmerman’s flag depiction. It also says that a portion of the proceeds will go to the Boys and Girls Club.

Next [WATCH] Maher Slams Hillary: Bill Needs to Have Another Affair, Anything to Make Things Interesting