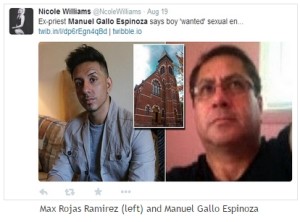 A priest admitted to inappropriate behavior with a teenage parishioner, according to NJ.com.

The 51-year-old priest, Rev. Manuel Gallo Espinoza, fled the country in 2003 after Max Rojas Ramirez, then 15, says he was raped by the priest.

The alleged pedophile priest came out of hiding long enough to talk to a reporter from NJ.com and admitted to having sex with the teen, who is now 28, in a bedroom of the rectory at St. Mary’s Church in Plainfield.

“I didn’t force him to do anything he didn’t want,” he reportedly told the journalist.


“One thing that I am conscious (of) is he was at that time a teenager, and it is a big mistake for me. He was older (sic) enough to walk away, but I think that I was attracted to him, that is the only explanation that I can think right now.”

He then cast the blame on the alleged victim, saying, “He had something evil in his mind. He approached me many times.”

“I made a mistake once and that’s (sic) was all,” he told the outlet. “Being sincere with myself I decided to quit (the) priesthood by myself and start from zero and I did so … Since that moment because of that mistake I decided (to) not hurt anyone else and I began teaching.”

The former priest is reportedly now a language teacher in Macara, Ecuador, where he fled after the accusation. It’s unclear if the U.S. will try to extradite him – and if so if it will be successful, as Ecuador has a poor record of extraditions. 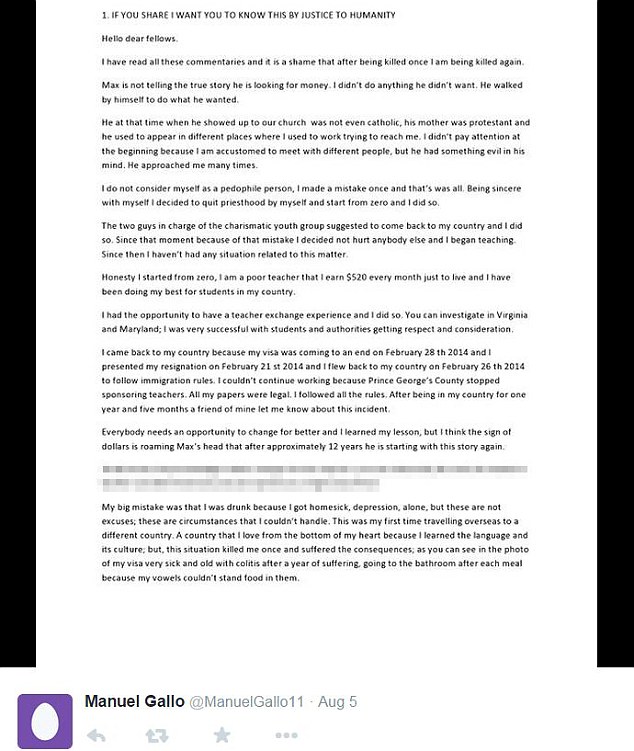 When asked if he knew that a 40-year-old having sex with a 15-year-old was illegal, he wrote in an email: “I just came fr (sic) my country and really in Ecuador a person at 15 years old is not consider (sic) so innocent.”

Max Rojas Ramirez said that the priest raped him in a room in church when he was 15 years old. Ramirez is now 28 years old.

Ramirez said that after he told the priest that he was confused about his sexuality, Espinoza attacked him.

Ramirez filed a lawsuit against the Archdiocese of Newark, saying it was responsible for the conduct of the priest and should have established stronger protections.