Umar Lee, a man described by the St. Louis Post Dispatch as an activist/cabbie was fired from his job at Laclede Cab, yesterday, for what Lee said were his “social-justice activities.

The dismissal comes after Lee was featured in a Post-Dispatch story about a neighborhood dispute in St. Charles County. Lee believes the dispute is racially driven and became involved in documenting it.

Lee also was a familiar figure over the last year at protests in Ferguson following the killing of Michael Brown last August.

He said company officials had previously expressed their opposition to his visible involvement and had warned him about taking part in protests and taking his cab to them. “So I started parking it blocks away,” Lee said Monday.

But after the St. Charles story appeared Monday on the Post-Dispatch front page, Lee said company owner Dave McNuttcalled him and fired him.

The Riverfront Times also featured a story on Lee’s dismissal, reporting that Lee was employed by the company for more than a decade. They posted some of the tweets from Lee and his supporters. 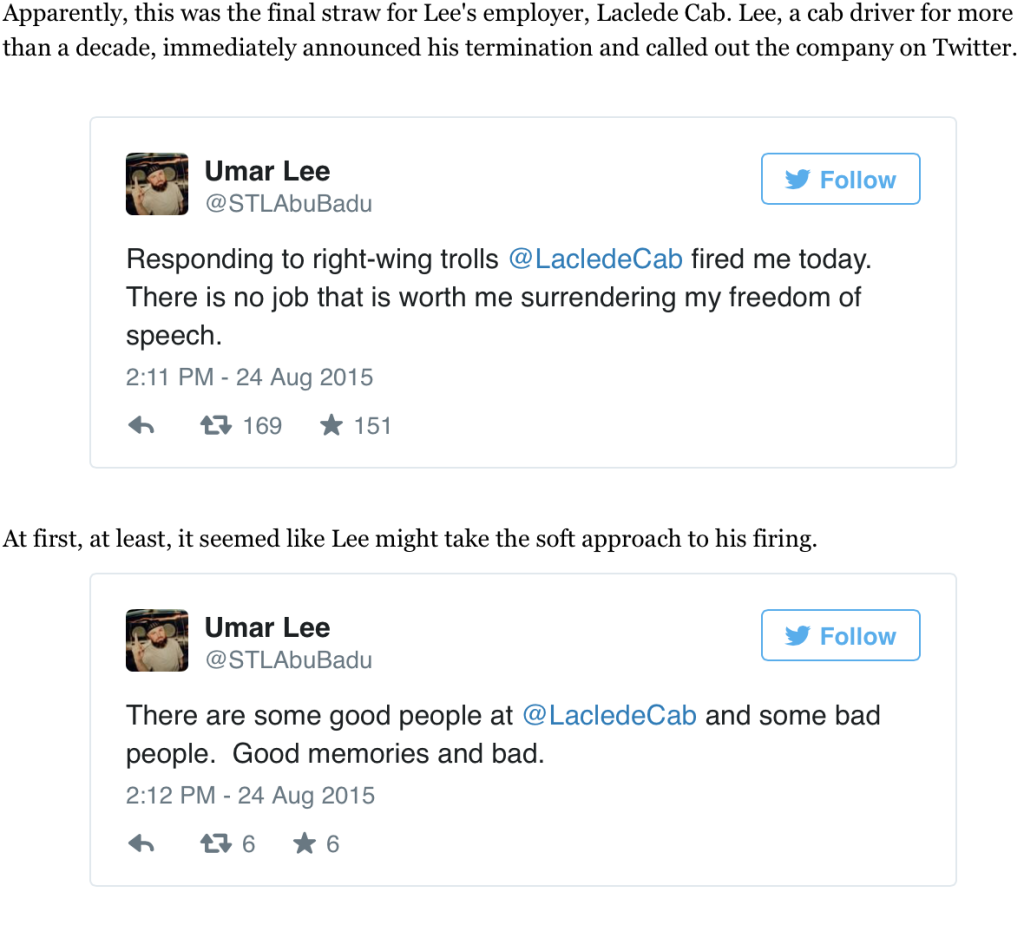 So, here’s a mature response to being canned. 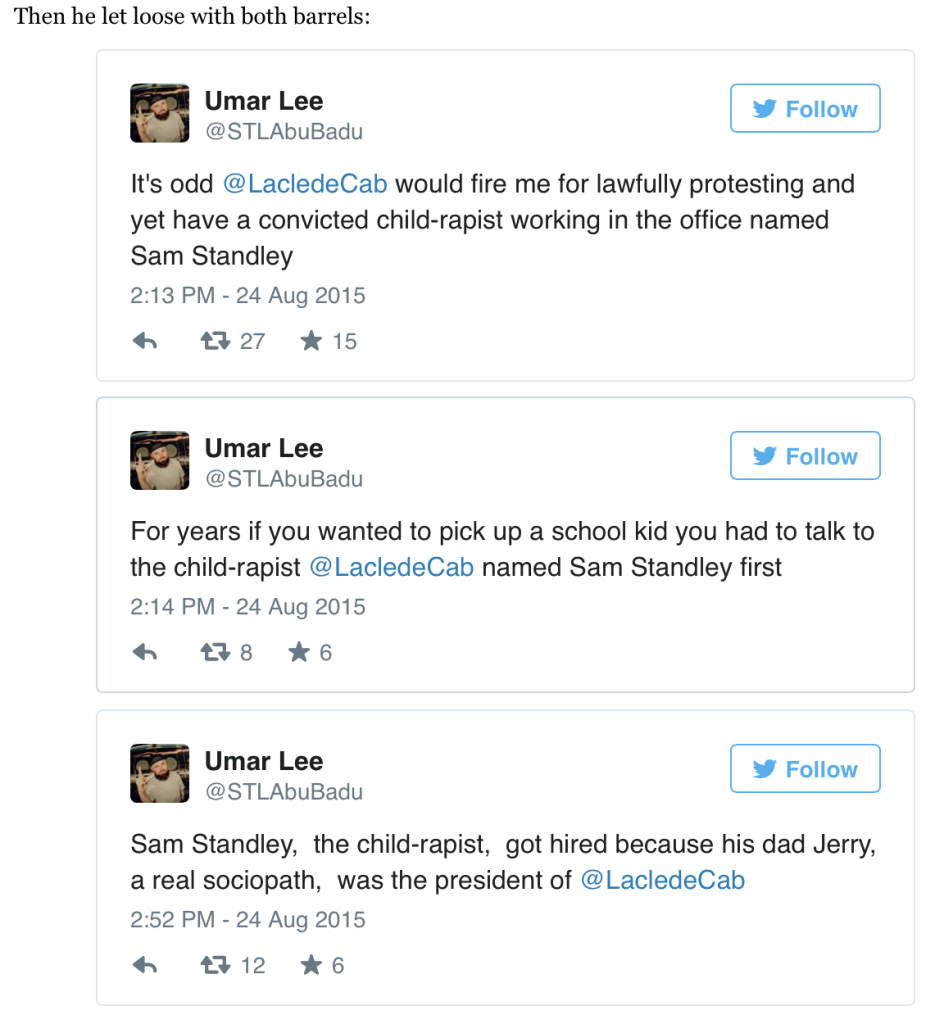 Sam Standley is the controller of Laclede Cab — and also appears to be listed in the state’s sex offender registry. (The Standley within the state registry lists his work address as 600 S. Vandeventer, which matches the cab company’s address.) His father, Jerry Standley, was president of Laclede Cab for 30 years before retiring in 2006.

But if Lee valued his job, you would never know it by the way he talks about his past employers, including Laclede, on his blog. Among other rants against his former employer he had this to say about his superiors:


Not everyone is as cool as Kenny. When I got hired the president was Jerry Standley.  To say Jerry wasn’t a people person is an understatement.  He was known for having a hot temper and firing people just for the hell of it. Before I was hired he reportedly walked around with a ruler measuring drivers hair to make sure it wasn’t too long. Shortly after I was hired he began offering a $100 reward for any driver who’d snitch on another driver for having a cell phone.

Jerry Standley retired in 2006. However,  his son Stan remained as the company controller.  Sam has the honor of being a convicted child-rapist in North Carolina. For years if you wanted a de-seg VICC school-trip taking African-American children in the city to school in the suburbs you had to talk to Sam. Yep good ‘ole Sam the registered sex-offender just the one you want with all the addresses of the kiddos.

Every time I had to see the degenerate Sam Standley I had to hold my tongue.  When I asked around as to how the hell this guy has a job for a company that transports kids everyone at Laclede said this is Dave McNutt’s company he does what he wants.

Not every had a problem with Stan. When Jerry Standley retired Adam McNutt ,son of Dave, took over as president.  He was slow to the draw and on the soft side unable to deal with and intimidated by gruff working-class cabbies. Apparently in order to solve this problem retired ex St. Louis County Police Major Ted Hylla was brought in. Later Adam would lead the way to computer-dispatching and modernization.

No one at Laclede knows exactly what Ted does other than walk around drinking coffee all day. A frequent question is “what the hell is Ted doing here?”. Interestingly while Ted seems to do very little and the African-American GM does everything on a day to day basis Ted outranks the GM.

A lot of drivers think Dave McNutt may have got help from Ted Hylla on some criminal stuff in the past and McNutt has taken care of him in retirement. That’s just speculation with no evidence.  What I do know is that while Ted promotes himself as a stand-up guy and law and order type on a daily basis he can be seen laughing and joking with a child-rapist like best buddies.

He goes on a rather lengthy rant and concludes by saying the job offers have not exactly been rolling in. Who-da-thunk? Also, he lists the phone numbers of his former employers and urges his supporters to give them a call and let them have a piece of your mind over his dismissal. I would say, good call. They might just have gotten rid of a really bad apple.

Next [PHOTOS] While Constructing A New Highway, Something Amazing Was Discovered