Police on Wednesday booked a 22-year-old Omaha man identified as a suspect in the assault and robbery of an elderly woman in the back of St. Cecilia Cathedral. They also arrested his mother.

Wayman Clark of Omaha was booked into the Douglas County Jail on suspicion of robbery, said Officer Michael Pecha, a police spokesman. Clark’s mother, Charlean Clark, 53, of Omaha, was booked on suspicion of being an accessory to a felony for harboring a fugitive, a felony.

A felony warrant for Wayman Clark was issued earlier Wednesday after members of the Omaha Police Department’s gang unit thought they recognized him as one of two assailants seen in a surveillance video. Crime Stoppers also received several tips indicating that Clark may have been involved, Pecha said. 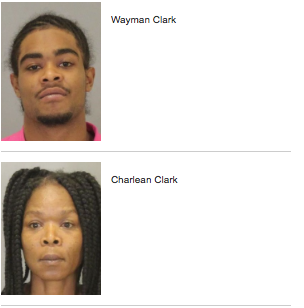 Officers with the gang unit and members of the Metro Area Fugitive Task Force located both Clarks shortly before noon in a vehicle at an apartment complex near 137th and Harrison Streets. Police have not identified a second suspect in the assault and robbery Sunday at St. Cecilia Cathedral, 701 N. 40th St.

Charlean Clark, speaking to a reporter from a relative’s phone Wednesday afternoon, said the family had no comment.


St. Cecilia released surveillance video that shows one man striking a 76-year-old Johnston, Iowa, woman after another man stole her purse. The incident occurred at 11:06 a.m. in the north vestibule of the church.

One of two men approached the 5-foot-6, 150-pound woman from behind and grabbed her purse before running out the door. The second man can be seen hitting the woman squarely on the side of her face, knocking her down. She hit her head on the side of the table as she fell.

Surveillance cameras mounted outside show the attackers running out the door, down Burt Street to 39th Street and then north toward Cuming Street, said the Rev. James Netusil of St. Cecilia. He estimated that the assailants were between 5-foot-8 and 5-foot-10. Wayman Clark is 5-foot-10.

According to Douglas County Court records, Wayman Clark was sentenced in 2012 to one year in the state prison system for theft by receiving stolen property, a felony. He also has been convicted for carrying a concealed weapon. When he was 17, Clark ran away from the Clarinda (Iowa) Academy, a residential facility for at-risk and delinquent teenagers.

A search of Nebraska court records did not turn up any felony convictions for Charlean Clark.

Next [WATCH] The Shocking thing the Modeling Industry told this 19yo Swedish Model!