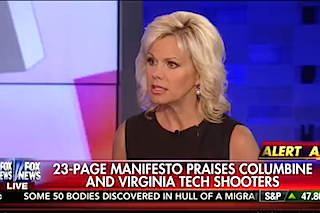 In his 23-page manifesto, WDBJ shooter Vester Flanagan accused his victims of racism and cited the Charleston church massacre as inspiration for his attack. So, during her live coverage of the incident on Wednesday afternoon, Fox News’ Gretchen Carlson demanded to know why the shooting is not considered a “hate crime” against white people.

“No, Gretchen, it’s not,” her guest, security expert Paul Viollis explained. “This is quintessential workplace violence from the behavioral profile of the individual to the actions that he displayed, from the manifesto to the time he was terminated in 2013.”

Pointing to the manifesto, Carlson argued that the shooter was specifically motivated by race. “He shot three white people today,” she pointed out. “Why is that not a hate crime?”

Viollis went on to argue that the shooter in this case was “clearly delusional” and that his true aim was to seek attention by committing the murder when he knew it would be broadcast live on television.

Another key point is the fact that Flanagan had worked with and knew personally his two victims, and had specific grievances against them, whereas traditionally, hate crimes are committed against random victims who happen to fit the profile of a specific group.