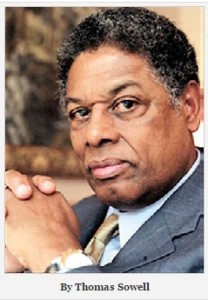 Even those of us who are not supporters of either Donald Trump or Jeb Bush can learn something by comparing how each of these men handled people who tried to disrupt their question-and-answer period after a speech.

After Bush’s speech, hecklers from a group called “Black Lives Matter” caused Bush to simply leave the scene. When Trump opened his question-and-answer period by pointing to someone in the audience who had a question, a Hispanic immigration activist who had not been called on simply stood up and started haranguing.

Trump told the activist to sit down because someone else had been called on. But the harangue continued, until a security guard escorted the disrupter out of the room. And Jeb Bush later criticized Trump for having the disrupter removed!

What kind of president would someone make who caves in to those who act as if what they want automatically overrides other people’s rights — that the rules don’t apply to them?

Trump later allowed the disrupter back in, and answered his questions. Whether Trump’s answers were good, bad or indifferent is irrelevant to the larger issue of rules that apply to everyone. That was not enough to make “The Donald” a good candidate to become President of the United States. He is not. But these revealing incidents raise painful questions about electing Jeb Bush to be leader of the free world. The Republican establishment needs to understand why someone with all Trump’s faults could attract so many people who are sick of the approach that Jeb Bush represents.

No small part of the internal degeneration of American society has been a result of supposedly responsible officials caving in to whatever group is currently in vogue, and allowing them to trample on everyone else’s rights.

Some officials allow “the homeless” to urinate and defecate in public, right on the streets, or let organized hooligans who claim to represent “the 99 percent against the one percent” block traffic and keep neighborhoods awake with their noise through the night. Politicians who exempt from the law certain groups who have been chosen as mascots undermine the basis for a decent society — which everybody, from every group, deserves.

Even those who happen to be in vogue for the moment can lose big time when the vogue changes, as vogues do.

Back in the 1920s, when there was international outrage on the political left over the trial of anarchists Sacco and Vanzetti, Supreme Court Justice Oliver Wendell Holmes wrote to British leftist Harold Laski, pointing out that the trials of black defendants were far worse, but nobody seemed to care about that.

“I cannot but ask myself why this so much greater interest in red than black,” he said.

The vogue has changed since then — and it can change again, when some other group comes along that catches the fancy of the trend-setters, and sways politicians who go along to get along.

The goal of “the rule of law and not of men” has increasingly been abandoned in favor of government picking winners and losers. Too many in the media and in academia do the same.

The problem is not with the particular choices made as to whose interests are to override other people’s interests, but that picking winners and losers, in defiance of facts, is choosing a path that demoralizes a society, and leads to either a war of each against all or to a backlash of repression and revenge.

The recent televised murder of two media people by a black man who said that he wanted a “race war” was one sign of the madness of our times. Nobody who knows anything about the history of race wars, anywhere in the world, can expect anything good to come out of it. Unspeakable horrors have been the norm.

It is a long way from a couple of disruptive incidents on the political campaign trail to a race war. But these small incidents are just symptoms of larger and worse things that have already happened in America, when the rules have been routinely waived for some.

We do not need to risk still worse consequences if we get yet another President of the United States who acts as if it is just a question of whose ox is gored.

About Thomas Sowell:
Thomas Sowell is a senior fellow at the Hoover Institution, Stanford University, as well as a prolific author including Black Rednecks And White Liberals. His website is www.TSowell.com. To find out more about Thomas Sowell and read his articles visit his website above.

Next Can the GOP Deal With Iran?