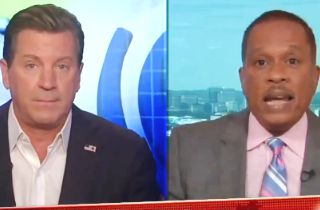 Given the “pigs in a blanket, fry ’em like bacon” chant this past weekend by protesters amid the killings of police officers, Bolling recalled a “what do we want? dead cops” chant that happened days before two New York officers were shot and killed.

Williams shot back, “That’s not a fact! What you’re stating is made up!”

He brought up how cop killings are down this year from last year, which he said was significant given the uptick in heated rhetoric this year. Bolling argued that last year was a “highly elevated year” for cop killings, but Williams just said, “You just don’t like the facts!”

Previous Why The Supreme Court Is Not Supreme

Next Vehicular Fatalities vs Fatal Firearms Accidents in the U.S. 1965-2013