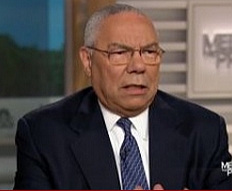 Colin Powell came out strongly for the Iran deal today, saying it’s “pretty good” and defending it from its domestic and foreign critics.

Powell told Chuck Todd that the greatest objection from U.S. critics––that it leaves Iran a lane open to go back to making nukes in a few years––is wrong because they’ve been on a “highway… with no speed limit” to make one in the past.

He said there are “remarkable changes” that he never thought Iran would agree to, and despite the other complaint that not enough is being addressed about Iran’s “bad behavior,” he believes the deal addresses the most important issue facing the world today and is confident in the verification system the U.S. has in place.

Powell is only the second major name to come out today in support of the Iran deal. DNC Chair Debbie Wasserman-Schultz came out in favor of the deal on CNN after internally struggling with the tough decision.

Watch the video below, via NBC:

Next [VIDEO] The View Co-Host: Kim Davis an Unattractive "Bitch" and "Monster"