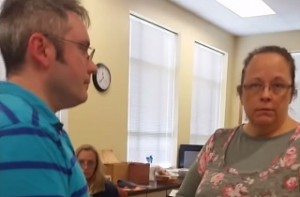 According to CBS News reporter Paula Reid, a Kentucky judge has ordered that Rowan County clerk Kim Davis be released from jail after she was arrested for refusing to issue same-sex marriage licenses.

Davis rose to prominence after the Supreme Court ruled in favor of legal same-sex marriages across all 50 states. Multiple videos showed her or her staff turning away same-sex couples who attempted to get their now-legal licenses approved. On September 3, Davis was jailed for contempt of court after repeatedly claiming she was working “under God’s authority” in denying the licenses.

“Defendant Davis shall be released from the custody of the U.S. Marshal forthwith,” U.S. District Court Judge David Bunning ordered. “Defendant Davis shall not interfere in any way, directly or indirectly, with the efforts of her deputy clerks to issue marriage licenses to all legally eligible couples.”

Bunning ordered Davis’s release after receiving notice from the plaintiffs in the case on Tuesday morning that several of them were able to obtain marriage licenses on Sept. 4. “The Court is therefore satisfied that the Rowan County Clerk’s Office is fulfilling its obligation to issue marriage licenses to all legally eligible couples, consistent with the U.S. Supreme Court’s holding in Obergefell and this Court’s August 12, 2015 Order.”