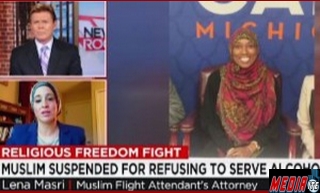 A Muslim flight attendant claims she was suspended from her job at ExpressJet for refusing to serve alcohol to passengers.

Charee Stanley filed a complaint last week with the Equal Employment Opportunity Commission saying that she had asked to not serve alcohol to customers because it goes against her religious beliefs.

Her lawyer, Lena Masri, told The Huffington Post the airline had agreed to accommodate her, but another employee complained about the arrangement. And last month, the airline revoked it, placed her on unpaid leave, and threatened to fire her.

The airline made only this brief comment to HuffPost: “We embrace and respect the values of all of our team members. We are an equal opportunity employer with a long history of diversity in our workforce.”

Masri said on CNN this morning they just want Stanley’s position to be reinstated with her reasonable request intact. Watch the video below, via CNN: