A Georgia woman gave a police officer a handwritten note thanking him for his service after being stopped for a traffic violation.

It wasn’t the type of message any officer thought they would get after just handing out a speeding ticket, but this woman wanted to give thanks.

“Mr. Officer,” the note read. “Shame on me for speeding. There is a lot of publicity (negative) about police officers and (your) job is very dangerous.

“I want you to know that my family and I feel very blessed to be protected by wonderful people like you! So thank you!” 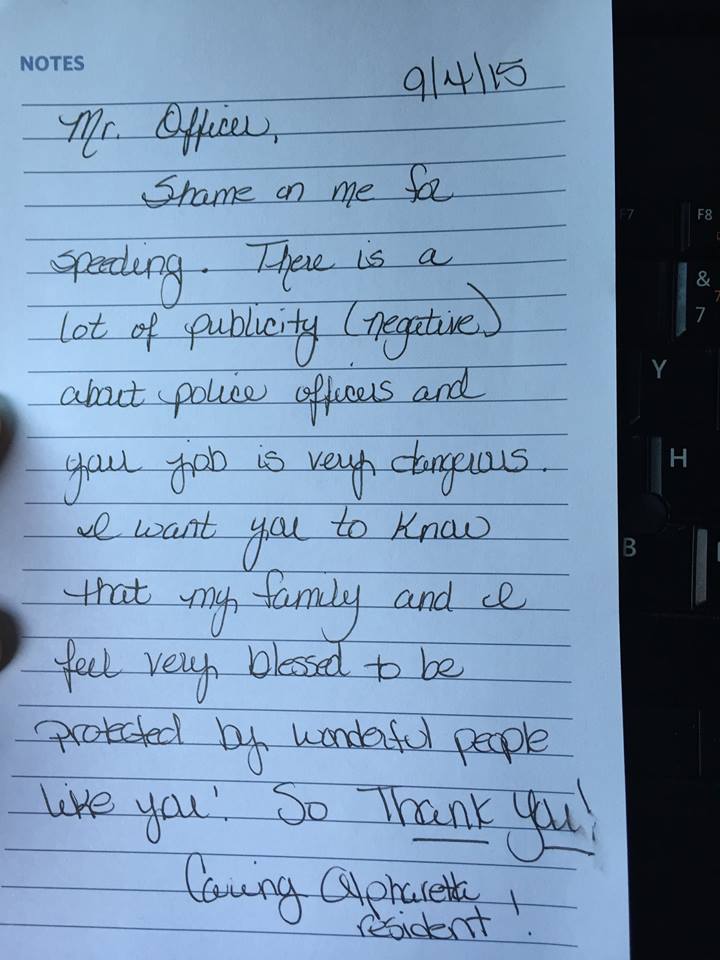 The author of the note did not share her name, but instead signed the note as a “caring Alpharetta resident.” The Alpharetta Department of Public Safety posted a picture of the note on their Facebook page and it’s already garnered nearly 1,000 likes.

“Good for her,” one user commented. “She was in the wrong, admitted it and was contrite for breaking the law. Laws are meant to protect the general public. Thanks for sharing.”

However, not everyone was sold on the story.

“I think it needs clarification,” wrote another user. “The Alpharetta police and all good police officers in general deserve our respect and admiration. They do an incredibly hard job with little pay.

“Unfortunately it is a position that is easily abused but the Alpharetta police are good and honest cops. That said, this note just reeks of a faked publicity stunt to bolster support for the local police and (sadly) gather ‘likes’ in an unfortunate time where Police are disrespected (and viral) in the media.”

Others simply questioned the woman’s intentions.

“She’s going to take the ticket to court and hopes he won’t show up because of the ‘nice’ letter!” another user wrote. “It’s sneaky effort to get out of a ticket and could almost be seen as a passive bribe!”