Mr. Hogan wrote on the President’s letter and sent it back hoping that Mr. Obama would see it. We don’t know if he did, but hundreds of thousands of others have, and we want to make sure hundreds of thousands more see it. In the letter, the father of the fallen hero rebuked the “Comm-in-chief” over the rules of engagement that have led to the unnecessary deaths of many of America’s servicemen.

When the U.S. commander of NATO declared the end of the mission against the Taliban in Afghanistan, Obama followed up with a statement declaring:

“Our combat mission in Afghanistan is ending and the longest war in American history is coming to a responsible conclusion.”

However, Mr. Hogan’s letter is a grim reminder of the feelings of so many of those who have served our country in the armed forces. His letter to Obama begins:

“I wonder how many of these get returned to you!

I am deeply saddened that you are the President of the United States. You sir are an embarrassment to the Oval Office. My son, as well as most Marines I know, despise you and your lack of representation for our military. Your ridiculous rules of engagement have caused the massive amount of casualties on your watch in Afghanistan. While we watch your media pander to your administration and clearly sweep things under the rug for you. I fully understand Marines die. You have tied their hands & feet! I am thankful I did not serve under a Comm. in Chief such as you. I am sickened that my son had to. I wonder… I doubt that you will see this, I hope you do though!

Here is a copy of Steve Hogan’s actual, hand-written letter back to Barack Obama: 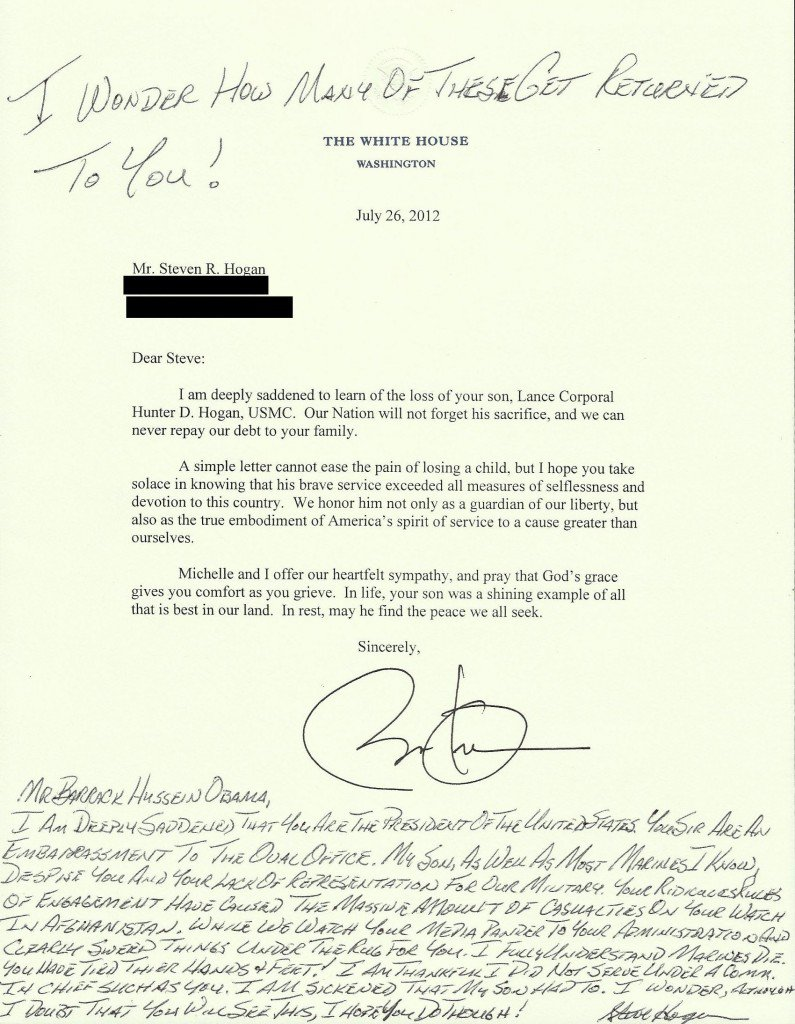