Well folks, it has happened, our Facebook page was deleted by Facebook entirely on Thursday, September 10th, 2015.

I awoke Wednesday morning to find the following notification from Facebook:

When I went to visit the page, I encountered this: 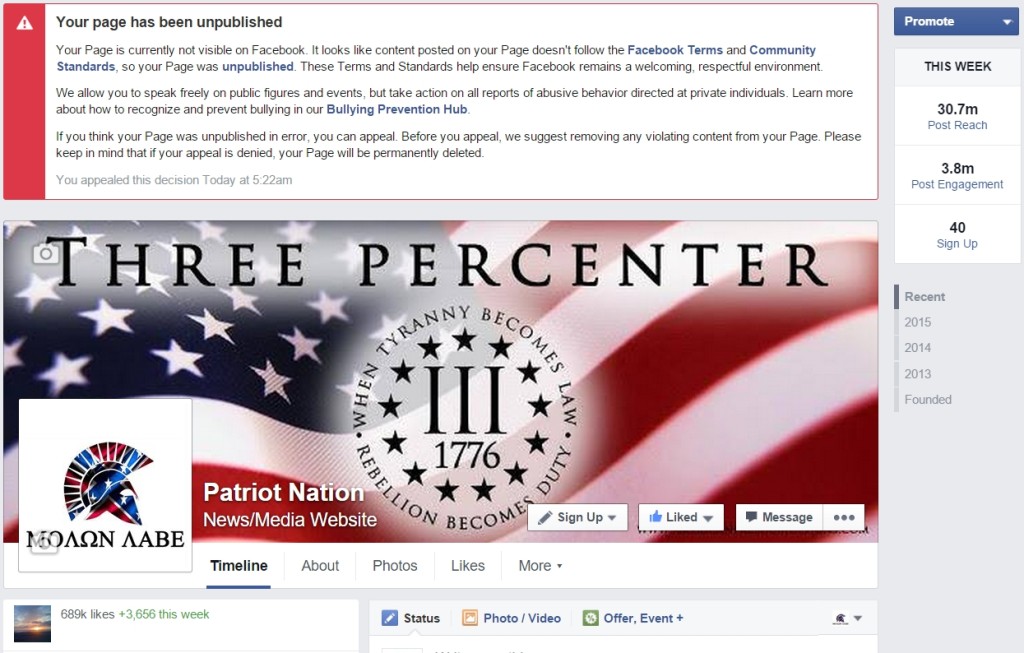 As you can see in the image, I appealed the decision at 5:22am so that should take care of the problem, right? If only it were that easy then it would be no big deal but unfortunately, it’s impossible to correct the problem when we have no idea why the page was unpublished to begin with. None of the articles or memes posted to the page are a violation of the Facebook Terms or Community Standards and never at anytime have we ‘bullied’ someone so therein lies the problem.

You can’t fix a problem unless the problem is clearly identified and anyone who’s had any dealings with the Facebook moderators knows they ban people whenever they choose, even when the content doesn’t violate anything in their terms and guidelines. In fact, it has happened to me many times before and each time I received a ban I would check to see if the Facebook Terms or Community Standards had changed, always noticing they hadn’t, which clearly indicates that Facebook moderators play by their own rules regardless of what the Facebook Terms or Community Standards say.


On multiple occasions I and others have reported pages that outright call for the killing of Jews and other people, only to receive a reply from Facebook that it doesn’t violate anything. So, let me get this straight…calling for the death of someone is ‘OK’ by Facebook but an internet meme or article that calls out the hypocrisy of an individual or group is off limits? If you would like to help please CLICK HERE to like the page and help us rebuild.

The biggest problem with Facebook is that it isn’t consistent across the board because two people or pages may post the same image and whereas one may be ‘punished’ by Facebook, the other is allowed to continue unscathed. This has been the case in times past when we’ve posted an image or article that’s been posted by another page and we received a reprimand from Facebook but the page that it originated from received no such reprimand.

For example, I was banned 30 days for posting the following image:

So where do we go from here, what do we do now that the page has been unpublished? The appeal has been submitted so now we wait but we aren’t optimistic about the outcome of the appeal. Our page has been the bane of liberal’s existence since it was created and it’s well known that Facebook is a haven for liberals and breeding ground for liberalism so the lik

elihood of our appeal being successful is slim.

In any case, we will keep you posted on the outcome.

Here’s the reason the page was deleted. How do I know? When I awoke Thursday morning I was force logged out of Facebook, and when I logged back in…this is what I encountered.

Make no mistake, we have been targeted by someone at Facebook who took offense to something we posted. The image below in no way violates any of their terms or community standards, further proving that they play by their own rules – community standards be damned! 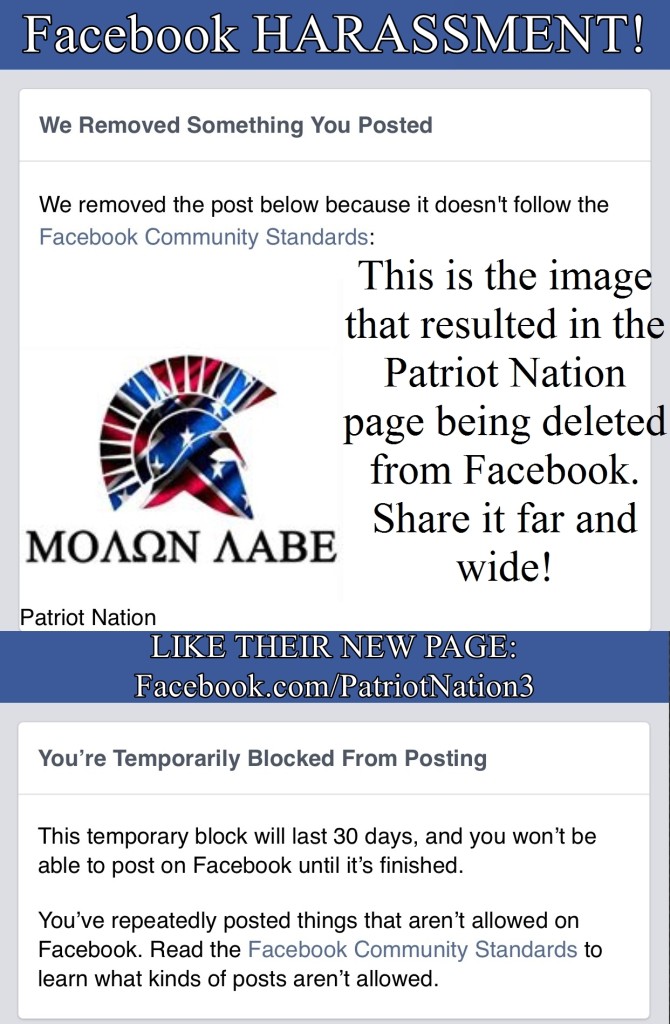 Next Too Close, The Degree Of Separation From Deadly Violence