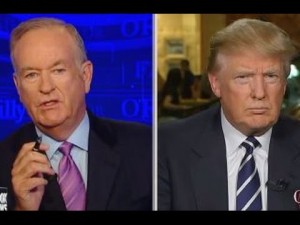 On Tuesday night (9/08/2015), Republican presidential candidate Donald Trump appeared on the Bill O’Reilly show and made the statement that #BlackLivesMatter activists are “trouble” (video below).

When O’Reilly questioned Trump on what the #BlackLivesMatter group wants, Trump gave the following reply:

“Well, I think it’s very simple, all lives matter, whether it’s black or white, what they’re getting away with is murder … I think they’re trouble. I think they’re looking for trouble. I looked at a couple of the people that were interviewed from the group.

I saw them with hate coming down the street last week talking about cops and police and what should be done to them, and that was not good.

And I think it’s a disgrace that they are getting away with it. I think it’s disgraceful the way they are being catered to by the Democrats.

And we have people, Democrats that are afraid to even say that. They are apologizing because they say, ‘White lives matter, and all lives matter.’ These are people that are unfit to run for office in my opinion.”

O’Reilly then played a clip of Colin Powell explaining how the #BlackLivesMatter movement draws attention to the problem of police killing black people in a “way that doesn’t seem appropriate”, and that he doesn’t mind the movement.

“He’s wrong,” Trump fired back. “He’s totally wrong. It’s all lives matter, and that should be the theme of this country, frankly, one of our themes. All lives matter.”

Former GOP vice presidential candidate Sarah Palin spoke at Tea Party Patriots rally against the Iran nuclear deal in Washington D.C. on Wednesday (9/09/2015), where she slammed President Obama for not calling off the “dogs.” Mediaite and other news outlets interpreted her comment as meaning the #BlackLivesMatter movement.


Previous [WATCH] What She Does With This Muffin Pan Will Have You RUNNING to The Kitchen!

Next [VIDEO] She Visits This Homeless Man Everyday. Each Time, He Hands Her A Letter Saying THIS…