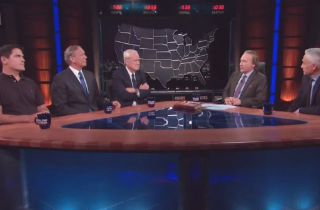 Bill Maher really went off on the case of Ahmed Mohamed and said maybe liberals should drop the political correctness and consider that maybe being cautious is a good thing.

Maher made it clear that of course the Texas teen deserves an apology for being arrested over a clock, but said there’s nothing wrong with being a little suspicious when there’s a young Muslim student with something that “looks exactly like a fucking bomb” and there are young Muslims “blowing shit up” all over the world.

Mark Cuban also said he had some doubts, based on a phone conversation he had with Mohamed––claiming his sister was feeding him answers––and saying he heard secondhand that he brought the clock to a few different classes and it wasn’t a problem for plenty of teachers.

Jorge Ramos and Chris Matthews pushed back a bit, with Ramos objecting to the profiling and Matthews dropping an f-bomb, but Maher said that considering this town is near where terrorists targeted that Draw Mohammed cartoon contest, he didn’t blame them for erring on the side of caution.

Next Groom plays brutal prank on Bride at their wedding, he surely will pay dearly...