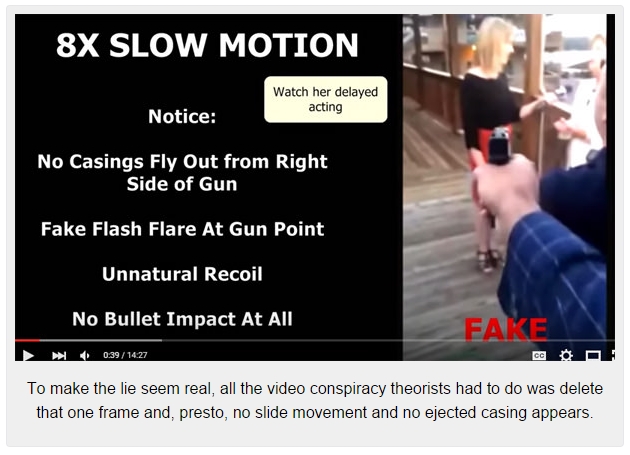 I am totally disgusted with a bunch of conspiracy-theory videos on the internet dealing with the WDBJ shootings.

The people (for lack of a better word) who put these videos together are no better than the gun-controllers who love to dance in the blood of the innocent victims of violent crime.

The theme behind the videos is that the shooting was a fake in order to push gun control.

If you need an example one is here but I don’t want to send them the traffic:

I hate going over this tragedy in such analytical detail, but I cannot let the lies stand unchallenged.

The conspiracy theorists claim that the murderer’s video shows that the slide on the semi-automatic handgun never goes back and no casing is ejected from the gun, which would be impossible if the gun was to fire another shot. They even try to prove their case by showing the shooting in very slow motion.

Not trusting their version of the video, I got a copy of the original and stepped through it frame-by-frame. Sure enough, one of the frames shows the gun in full recoil with an empty casing appearing just above the reporter’s left elbow. In the very next frame, the casing is off screen, the slide has moved forward, and the gun has lowered back down.

To make the lie seem real, all the conspiracy theorists had to do was delete that one frame and, presto, no slide movement and no ejected casing appears.

The shooting was for real, but the conspiracy theorists do have one thing right: it IS being used to push for more gun control.