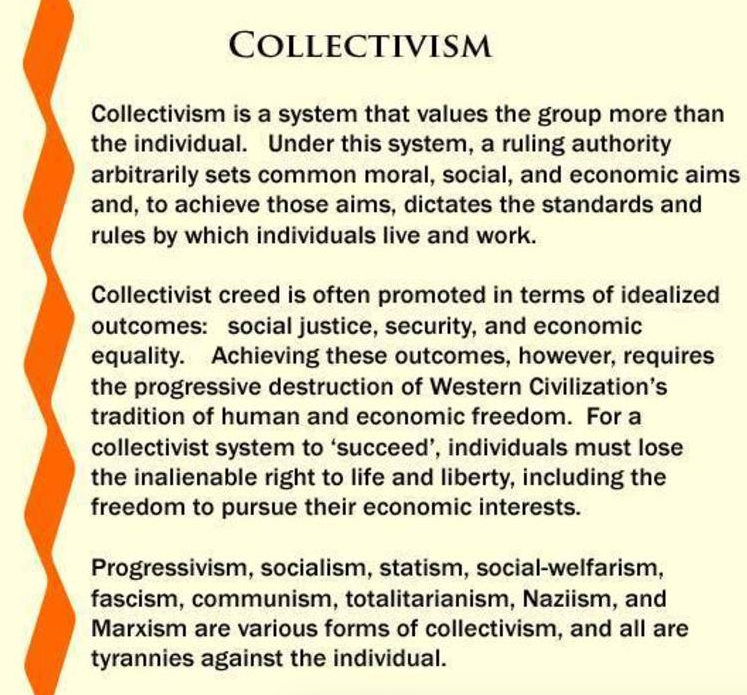 “collectivism … treats society as if it were a super-organism existing over and above its individual members, and which takes the collective in some form (e.g., tribe, race, or state) to be the primary unit of reality and standard of value.” — Prof. Fred D. Miller

“Collectivism means the subjugation of the individual to a group — whether to a race, class or state does not matter. Collectivism holds that man must be chained to collective action and collective thought for the sake of what is called ‘the common good’.” — Ayn Rand

“Collectivism requires self-sacrifice, the subordination of one’s interests to those of others.” — Ayn Rand, Letters of Ayn Rand

“Collectivism, unlike individualism, holds the group as the primary, and the standard of moral value.” — Mark Da Cunha

“G. W. F. Hegel (1770-1831), and Karl Marx (1818-83) … both viewed political phenomena as the inevitable result of historical processes, and regarded collectives as of greater reality and value than their individual members.” — Prof. Fred D. Miller

“collectivist ethical principle: man is not an end to himself, but is only a tool to serve the ends of others. Whether those ‘others’ are a dictator’s gang, the nation, society, the race, (the) god(s), the majority, the community, the tribe, etc., is irrelevant — the point is that man in principle must be sacrificed to others.” — Mark Da Cunha“Collectivism is the political theory that states that the will of the people is omnipotent, an individual must obey; that society as a whole, not the individual, is the unit of moral value. … Collectivism is the application of the altruist ethics to politics.” — Dr. Andrew Bernstein

“Collectivism often sounds humane because it stresses the importance of human needs. In reality, it is little more than a rationalization for sacrificing you and me to the desires of others.” — Jarret B. Wollstein in The Causes of Aggression

“Individual rights are not subject to a public vote; a majority has no right to vote away the rights of a minority; the political function of rights is precisely to protect minorities from oppression by majorities (and the smallest minority on earth is the individual).” — Ayn Rand

“The foundation of individualism lies in one’s moral right to pursue one’s own happiness. This pursuit requires a large amount of independence, initiative, and self-responsibility.

“But true individualism entails cooperating with others through trade, which facilitates the pursuit of each party’s happiness, and which is carried out not just on the level of goods but on the level of knowledge and friendship. Trade is essential for life; it provides one with many of the goods and values one needs. Creating an environment where trade flourishes is of great importance and great interest for the individualist.

“Politically, true individualism means recognizing that one has a right to his own life and happiness. But it also means uniting with other citizens to preserve and defend the institutions that protect that right.” — Shawn E. Klein

“Individualism regards man — every man — as an independent, sovereign entity who possesses an inalienable right to his own life, a right derived from his nature as a rational being. Individualism holds that a civilized society, or any form of association, cooperation or peaceful co-existence among men, can be achieved only on the basis of the recognition of individual rights — and that a group, as such, has no rights other than the individual rights of its members.” — Ayn Rand

“One byproduct of individualism is benevolence — a general attitude of good will towards one’s neighbors and fellow human beings. Benevolence is impossible in a society where people violate each others’ rights.” — Glenn Woiceshyn

“Freedom is an intellectual achievement which requires disavowal of collectivism and embrace of individualism.” — Onkar Ghate

“You have to ask yourself, ‘Who owns me? Do I own myself or am I just another piece of government property?’ ” — Neal Boortz

Found at The Federalist Papers