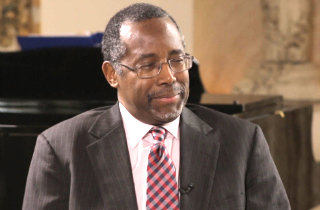 In the months and months of renewed national debate over the Confederate flag, numerous public institutions, including NASCAR, have worked to remove and/or prohibit the image due to its supposed ties to racism and controversy.

Ben Carson was asked to weigh in on the issue today as he was touring a camp set up by former driver Richard Petty for disabled children. As it turns out, Carson told The Associated Press that even though the racing organization bans the flag’s official use or sale of paraphernalia, NASCAR fans should continue flying the flag “if it’s private property and that’s what they want to do.”

Carson acknowledged that the flag was seen by many as a “symbol of hate,” but said he would not interfere with it’s flying in local communities if it was approved the majority.

“Swastikas are a symbol of hate for some people, too. And yet they still exist in museums and places like that,” Carson said.

“He’s very humane,” Petty said when asked what he liked about Carson. “That’s one of his strong points as far as we’re concerned.”