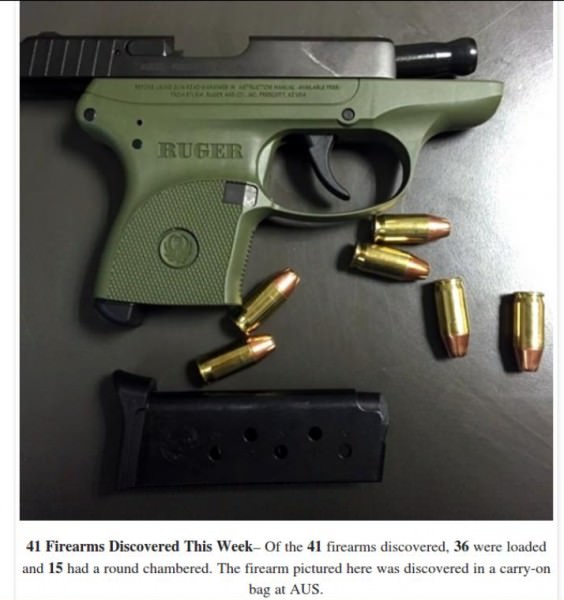 TSA is looking at another record year for people who forget that they have a firearm in their bag before they reach the security checkpoint.  Last year they found 2,212 firearms in people’s carry on baggage.  This year, in the first 37 weeks, they have found 1,756.  More people are travelling by air, and the number of people with concealed carry permits is skyrocketing.   In 2014, the average number of firearms found in carry on baggage was a bit more than six per day.

2,212 firearms were discovered in carry-on bags at checkpoints across the country, averaging more than six firearms per day. Of those, 1,835 (83 percent) were loaded. Firearms were intercepted at a total of 224 airports; 19 more airports than last year.

This year, the average is a bit short of seven per day, 6.78 firearms found in carry on baggage each day.  TSA says that the vast majority are simply people who forgot the firearms was in the bag.

A lot of travelers just forget to follow the rules, especially this year as the number of people traveling by air is on the rise and more travelers are opting for carry-on bags.

Given the large numbers of people travelling, the numbers of guns in airports  found in checked bags are statistically insignificant.  People with concealed carry permits follow the rules rather conscientiously, 9,999 times out out of 10,000.  But there are so many concealed carriers (nearly 15 million by some accounts) that the one in 10,000 that forget, through distraction, momentary emergency, or action of a family member, amount to nearly seven a day.

Surveying the firearms impounded by TSA, it is clear that the vast majority are quality arms, legally carried for self defense.  The Ruger LCP pictured above is a representative sample.

TSA mentioned that 83% of the firearms in these cases are loaded, which reinforces the observation that the vast majority of these weapons are carried for self defense.

Here is the TSA definition of loaded:


As defined by 49 CFR 1540.5 a loaded firearm has a live round of ammunition, or any component thereof, in the chamber or cylinder or in a magazine inserted in the firearm.

Here are the TSA guidelines for transporting firearms as checked baggage:

As the number of concealed carriers continues to rise, a TSA policy should be formulated so as to not unduly punish people for a momentary lapse that caused a little inconvenience and no substantive harm.

A national reciprocity law would go a long way toward making a national TSA policy easier.  With a national reciprocity law, we would not be seeing disarmist police and prosecutors in New York and New Jersey looking to ruin the lives of innocent people from other states who dare to exercise their Second Amendment rights.   It has become so bad that Governor Christie of New Jersey has made a pledge to  pardon legal gun owners who are arrested in New Jersey.

Absent a change in the state legislature on gun transport laws, Christie said that “I can do what I can do during the intervening time, which is if I think someone’s been treated unjustly, we’re gonna use the pardon and the clemency authority the governor has under the constitution, as we’ve done with Steffon Josey-Davis, and Brian Aitken and Shaneen Allen, and we’ll continue to do with others going forward if circumstances are appropriate.”

Cynics might say that Governor Christie is simply using the firearms issue to advance his presidential aspirations.  But he has a history of issuing pardons, at least after the case draws national attention to the draconian New Jersey firearms laws.

His attitude reflects the national acceptance that exercise of Second Amendment rights is achieving.

Perhaps, some future policy will allow the 99.9% of people who forget a firearm in their carry on, a means of paying a civil fine, similar to a traffic ticket, and having their firearm placed in a locked box with the airplane captain, to be delivered to them at the destination, for a reasonable fee.  Everyone would gain by that arrangement.

Next [VIDEO] Here's Why the Anti-Gun “The View” Is Bombing