Georgians are complaining about the way their schools teach religion, but a school district that is getting some of the criticism says it’s not doing anything new.

“My daughter had to learn the Shahid and the Five Pillars of Islam, which is what you learn to convert,” Walton County parent Michelle King complained to Channel 2 Action News. She added that the school didn’t teach the Ten Commandments “or anything about God.”

The Georgia Department of Education requires schools to teach about Islam. 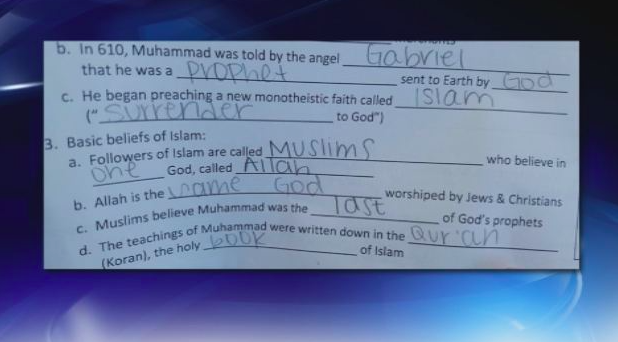 In seventh grade, Georgia middle school students must be able to describe the cultures of the Middle East and compare and contrast the prominent religions — Judaism, Islam, and Christianity. “It is important that students understand the differences between each of these religions to help them understand the tensions that exist in the region,” the state standards, known as the Georgia Performance Standards, say.


In Walton County, that manifested itself in a homework assignment one parent found objectionable: “Allah is the [blank] worshiped by Jews & Christians,” the document said. The child filled in the blank with “same God.”

“It seemed like half the truth to me, they didn’t talk about the extreme Islamics,” the child’s father, Steven Alsup, told Channel 2. A Facebook page on the issue was claiming nearly 2,000 members

Kim Embry, a spokeswoman for Walton County Public Schools, said Monday that the district had gotten only five phone calls — two from the same number and one from someone in a different state who didn’t have children. She’s puzzled by the sudden interest in Walton.