Cheyenne Fitzgerald was shot in the back on October 1st during the attack at Umpqua Community College where she was attending class in Roseburg, Oregon.  Her mother, Bonnie Schaan has issued a statement during an interview with NBC Nightly News saying,

“America we need to pack guns – if this is what it’s coming to – to have to protect ourselves.”

Bonnie also said that her daughter should have been armed and emphasized that Americans must be able to defend themselves during attacks like the one in Oregon.

According to Breitbart News, Roseberg residents came out in force in support of the 2nd Amendment after the shootings at UCC.  Casy Runyan, a disabled Marine, said he carries a Glock handgun with him at all times. He said, “All my friends agree with me. That’s the only kind of friends I have.”

Another resident who was interviewed criticized the gun-free zone policies at UCC, saying that such policies open the door to cowardly attackers.

It would appear that the American patriots of Oregon are standing up to Obama’s attempt at using their community’s tragedy to push his gun control agenda. 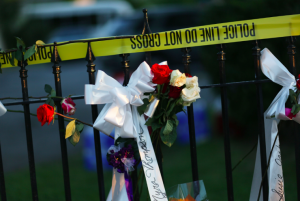