Ben Carson has spoken out on the Oregon shooting many, many times, but that didn’t stop the 2016 Republican presidential candidate from repeating himself on his official Facebook page on Monday night. 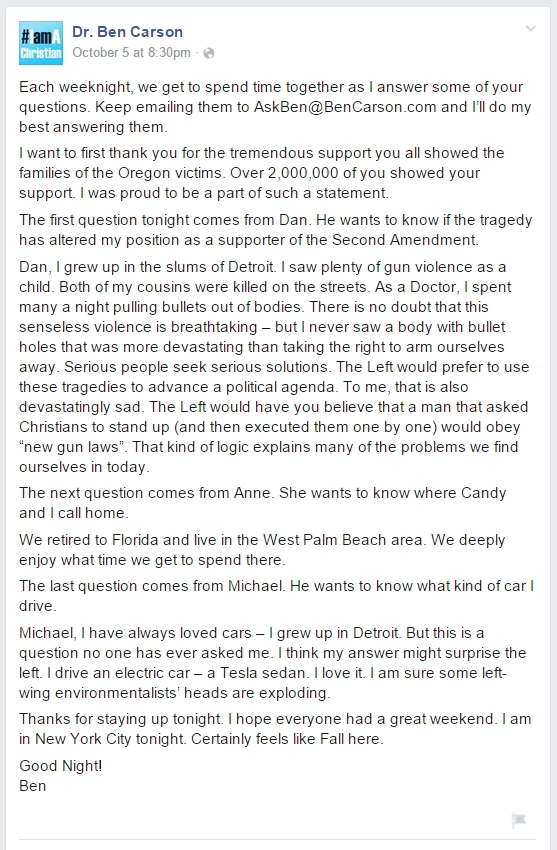 As Rolling Stone notes, Carson was writing in response to a question supposedly submitted from one of his followers to the [email protected] email address. A supporter named Dan wanted to know what effect, if any, the shooting at Umpqua Community College in Roseberg had had on his second amendment views.

The answer was no.

Carson explained that he “grew up in the slums of Detroit” and “saw plenty of gun violence as a child.” He claims that two of his cousins were killed as a result of gun violence, and that he witnessed his fair share of bullet-ridden bodies as an emergency room doctor. Yet despite these horrors, the presidential candidate assured Dan that he remained an avid supporter of the constitutional right to bear arms.

“There is no doubt that this senseless violence is breathtaking,” he said, “but I never saw a body with bullet holes that was more devastating than taking the right to arm ourselves away.”


“Serious people seek serious solutions,” Carson continued, implying that he and others like him remain “serious” while those on “the Left would prefer to use these tragedies to advance a political agenda.” Of course, this ignores the fact that his taking one of the two entrenched positions regarding the second amend is part of a “political agenda.”

Next McDonald's Employee Fired For Placing THIS Inside Of Happy Meals!