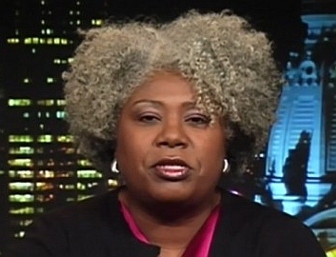 An Ivy League professor has suggested naming Republican presidential candidate Ben Carson “coon of the year” for saying it should be legal for private citizens to display the Confederate flag.

Anthea Butler is a religious studies professor at the University of Pennsylvania, and also an active Twitter user with more than 62,000 tweets. Last week, another user tweeted a link to a Sports Illustrated article describing Carson’s declaration that NASCAR fans should be allowed to show the Confederate flag. 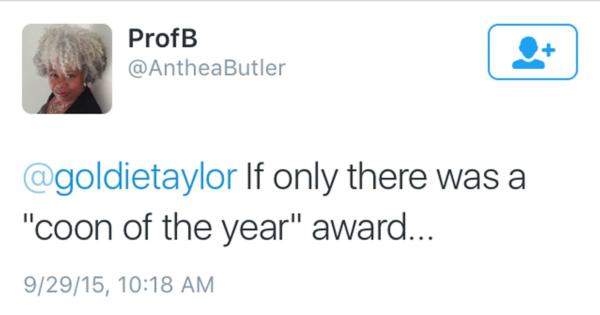 “Coon” is a common slur for blacks, though it’s worth noting Butler is black herself.

In the wake of the September 11, 2012 attacks on the U.S. embassy in Benghazi, Libya, Butler said that Sam Bacile should be held responsible and jailed.

Bacile made the anti-Islam movie “Innocence of Muslims,” which angered Muslims and was cited as a reason for the attack on the embassy, which killed U.S. Ambassador Christopher Stevens. Later reports have cast doubt on this explanation, however.

Butler said the filmmaker should “shut the fuck up about Islam,” and placed the blame for Benghazi squarely on his shoulders.

“Good Morning. How soon is Sam Bacile going to be in jail folks?” she asked on Twitter. “I need him to go now. When Americans die because you are stupid…”

When other Twitter users tried to inform her of the free speech protections in the First Amendment, she replied, “I know we have First Amendment rights, but if you don’t understand the Religion you hate, STFU about it. … And people do to jail for speech. First Amendment doesn’t cover EVERYTHING a PERSON says.”

Butler’s Twitter page was then locked, and only users who have been granted access could view her page. This was done in order to keep out “trolls,” according to Butler’s Twitter profile description.

UPenn religion department chair Justin McDaniel told The Washington Examiner that Butler is on sabbatical and that the department has no comment on the matter, while a Carson campaign spokesperson said the tweet “does not merit a response.”

“God ain’t good all of the time,” she said. “In fact, sometimes, God is not for us. As a black woman in an nation that has taken too many pains to remind me that I am not a white man, and am not capable of taking care of my reproductive rights, or my voting rights, I know that this American god ain’t my god.”

“As a matter of fact, I think he’s a white racist god with a problem,” she continued. “More importantly, he is carrying a gun and stalking young black men.”

Back in 2013 she described the death of Michael Brown as a “blood sacrifice” for “America’s racist god.” When criticized for her rhetoric, she has pointed out that “I have tenure, I can’t get fired.”