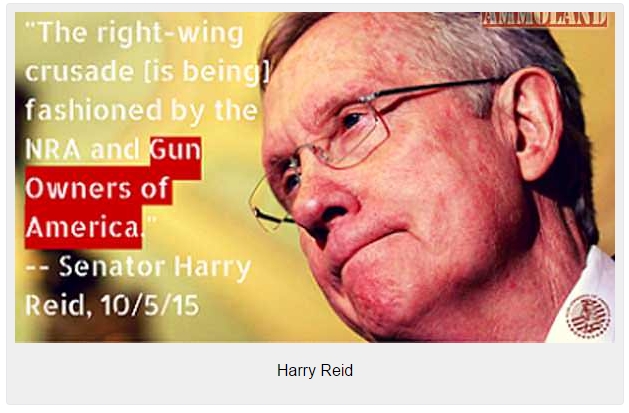 You saw Obama’s angry rant after the latest shooting in a gun-free zone.

The President declared all-out war on the Second Amendment, even suggesting that we should follow Australia’s example — a country that confiscated firearms from law-abiding citizens.

GOA in the News

Gun Owners of America prepared a blistering response to the President, which can be read here.

Subsequently, GOA was asked to address the nation in USA Today, and we have taken our “guns save lives” message to the airwaves all over the country, including CNN, Armed American Radio and Latino TV.

The President wants the eradication of guns to be his legacy.

And intense pressure that is being exerted inside-the-Beltway in Washington could coerce Congress into fighting on his side.

That is, unless we can stop them.

We stopped Obama in 2013. In fact, Senator Harry Reid just attacked Gun Owners of America this week because of our role in stopping gun control, right after the Sandy Hook tragedy.

Reid still remembers 2013 vividly, when the loud outcry from GOA members and activists made it IMPOSSIBLE for other gun groups to compromise.

“You’ve got Gun Owners of America which is way to the right of what the NRA is. It makes it hard for the NRA to be reasonable.” (Nevada Public Radio, April 6, 2013)

Harry Reid is still sore that “not one word” of gun control passed.

The establishment was shocked. If you remember, EVERYONE in the media — even some gun groups — were conceding that new gun control restrictions were “inevitable.”

But Gun Owners of America never conceded one inch. The message that YOU helped us deliver was “Oppose EVERY word of gun control.”

The effort paid off, as acknowledged by several media outlets:

That was 2013. Now, it seems that anti-gunners are trying to resuscitate the old “it’s inevitable” mantra that almost succeeded two years ago.

Just peruse almost any news station this week, and you will see the renewed push for restricting your gun rights.

Well, let them try. We defeated them once. It can be done again.

But we need your help.

It’s time for “All hands on deck”

Many GOA activists took action in 2013, responding to our email alerts and sending multiple communications to their elected legislators.

And there are many who continue to take action to this very day.

But there are still some who haven’t been taking action on our alerts.

If there is ever a time we need your help, it’s now.

This is an ALL OUT BATTLE, where we need YOU to contact your elected officials in Washington.

Why? Because they are under intense pressure.

GOA has made it VERY easy to take action. All you have to do is go here to send an email to Representative and Senators with just a couple clicks of your mouse.

When the screen loads, you just type in your address. Why does it ask for that? Because your address determines which legislator will get your email. Legislators will NOT read any mail sent from you that does not have an address.

They don’t care about any messages that come from outside of their districts.

That’s why it’s so imperative that you let them know you are one of their constituents … and that you will “remember in November” if they vote to eviscerate the Second Amendment.

Please Take Action by clicking on the link here and sending your email to your Representative and Senators. We want to inundate every legislative office with thousands of communications from pro-gun constituents in the districts.

The pre-written text for this first volley is short-and-sweet. But we will provide you even more sample letters over the next few weeks, and add more detail to explain the horrendous legislation that your elected officials need to oppose.

So the next time it will literally take seconds to send an email, thereby joining your voice to the tremendous throng of gun owners nationwide who are putting the “heat” on their legislators.

About:
Gun Owners of America (GOA) is a non-profit lobbying organization formed in 1975 to preserve and defend the Second Amendment rights of gun owners. GOA sees firearms ownership as a freedom issue. “The only no comprise gun lobby in Washington.” – Ron Paul
Visit www.GunOwners.org to join.

Previous More Voices Outside Roseburg Than Inside Calling for Gun Control

Next The Politics of the Gun