Dining out with children can be rough on parents but an Idaho mother was shocked to receive a nasty note from nearby diners about her “screaming kid.”

Katie Leach told KTVB that her 10-month-old son is going through a yelling phase. He’s not angry or upset, but sometimes will yell when he’s excited. Leach said she’s working on teaching him how to use his “indoor voice,” but at his young age, he is still in the learning stages, and attempts at keeping him quiet are not always completely successful. 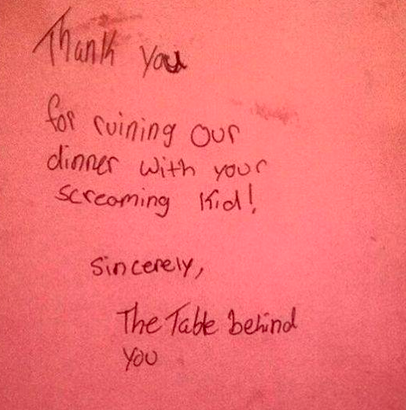 Leach said two women in their late 50s or early 60s “slammed” a note down at Leach’s table. The pair then returned to their own table, which was directly behind Leach’s table.

The note read, “Thank you for ruining our dinner with your screaming kid! Sincerely, the table behind you.”


Leach confronted the two women and explained the situation, but the women were not sympathetic, saying they have grandchildren who have never behaved that way.

After speaking to the women, Leach showed the note to the Texas Roadhouse manager. The manager approached the women’s table and told them they could finish their meals, but then needed to leave quietly. The manager paid for Leach’s meal, and told her that her family is welcome back to the restaurant anytime.

A spokesperson for Texas Roadhouse said Consumer Reports rated the restaurant chain as one of the loudest, and that the company is “proud to be loud.”