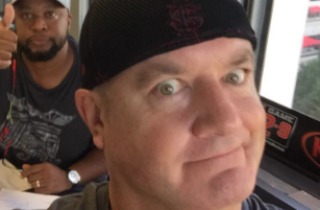 Mike Bell, a sports-radio host for 92.9’s The Game, is in a bit of trouble after hurling some insults from the film Anchorman towards a female baseball analyst on ESPN.

In the month that’s followed Curt Shilling‘s suspension for his Muslim-Nazi controversy on Twitter, Jessica Mendoza has been covering the MLB season for Sunday and Monday Night Baseball.

Mendoza, a softball Olympic medalist, became the first woman to ever do analysis for a postseason MLB game Tuesday night. But Bell sent out a series of tweets expressing that Mendoza is not qualified to commentate because softball is not the same as baseball

Bell made his feelings first known with a tweet out of 2004: 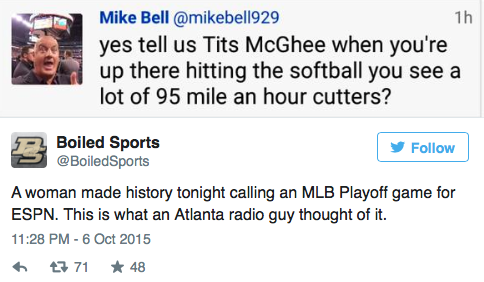 While the original tweet was taken down, Bell defended himself from critics accusing him of sexism, while sending out even more tweets:

@DThackham @andrewhirsh are all you young 20somethings really that much of pc candy ass? Did you guy go to college to get stupid?

@y_wheezyt using female broadcasters who never played the sport as color analysts, that would be a feminist agenda

You guys are telling me there isn’t a more qualified Baseball player ESPN can use than a softball player? Gimme a break!

To those asking about Curt Schilling, yes I would prefer a softball player to him.

Eventually though, Bell seemed to back off, and while he didn’t direct it to Mendoza’s Twitter handle, he offered apologies for what he said:

I’ve been trending for all the wrong reasons tonight. I apologize for calling Jessica Mendoza Tits McGee.

Bell has been suspended from his show, but read a statement there today, saying “there is no place for that kind of stuff on my show. I will be more mindful. I hope I can be a better talk show host and better person. This has been an eye-opening experience.”

Next [AUDIO] Rand Paul Proposes Schools Post Stickers Saying "We Are Armed, Come In at Your Own Peril"