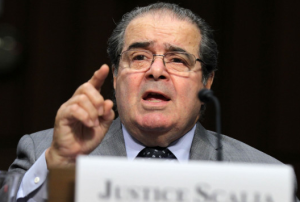 After the ruling was revealed on June 26, Ginsburg revealed that her good friend — and staunch idealogical opponent —  Justice Antonin Scaliatook to belting out a few bars of Bob Dylan’s “The Times They Are A-Changin”.

The choice of song was no accident; Scalia voted against the controversial decision, calling it a “threat to democracy”. In his dissent, Scalia went as far as to categorize some of his fellow justices, including Ginsburg, regarding their potential impartiality. On the issue of their upbringings, he wrote, “Four of the nine [Justices] are natives of New York City. Eight of them grew up in east- and west-coast States. Only one hails from the vast expanse in-between”. Ginsburg was born and raised in Brooklyn.

Despite their differences, Ginsburg and Scalia seem to have a good personal relationship; the 82-year-old Ginsburg reportedly also told NZZ, “We got along very well as always… We had wonderful evening”.

Reuters writes, “[Ginsburg] said she had never in her long legal career worked in an environment in which colleagues showed such respect and even fondness for one another”. We could only hope that we’ll soon hear details about a Clarence Thomas rendition of Mr. Tambourine Man.