On the same day his new film Steve Jobs arrives in theaters, actor Seth Rogen tweeted this succinct message to his 3.27 million followers:

What could possibly have made Rogen so angry?

Perhaps it was his victim-blaming comments about the Oregon shooting.

Or maybe it was when he wrote, “I never saw a body with bullet holes that was more devastating than taking the right to arm ourselves away.”


Could it have been his refusal to call President Barack Obama a “real black president?”

Rogen hinted at the origin of his rage with this response to yet another controversial statement Carson made this week, this one regarding how arming the Jews during World War II could have prevented the Holocaust: 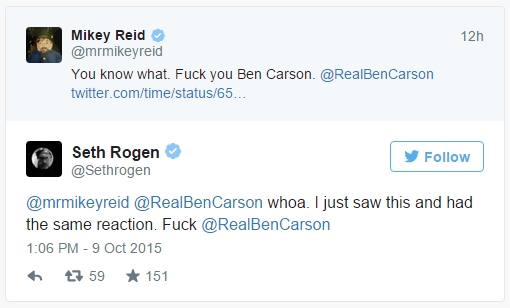 “I think the likelihood of Hitler being able to accomplish his goals would have been greatly diminished if the people had been armed,” Carson told CNN this week. “I’m telling you there is a reason these dictatorial people take guns first.”

The Anti-Defamation League begs to differ, responding with the following statement:

“Ben Carson has a right to his views on gun control, but the notion that Hitler’s gun-control policy contributed to the Holocaust is historically inaccurate. The small number of personal firearms available to Germany’s Jews in 1938 could in no way have stopped the totalitarian power of the Nazi German state.”

Previous TED NUGENT to the "Losers": Not Having a Gun Is "Suicidal Choice That Will Get You Killed"