Sometimes honesty is the best (and cheapest) policy.
One person found this to be the case recently after their three-year-old hit a neighbour’s car while opening a car door.
They left a note informing them of the accident and offered to pay for the damages, but instead they received this note. 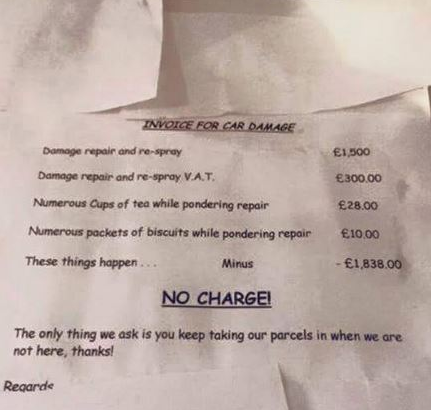 It seems that taking in their neighbours’ parcels and being honest about denting their cars paid off, and the neighbour decided to let them off, simply saying: ‘These things happen.’
Naturally they posted the note to Facebook to share their good luck and their neighbours amazing ability to forgive.
Of course one sassy commenter pointed out that the kindly person who authored the note should really charge themselves for using Comic Sans.
There is, however, a chance the note could have been faked – but it’s still a lovely thought.


Previous [WATCH] Ronda Rousey Sends Message to Bieber About Messing With Her Sister & Yes, There Were Tears

Next Teacher Asks Students ‘What Do You Wish Your Teacher Knew?’ The Answers? Shocking