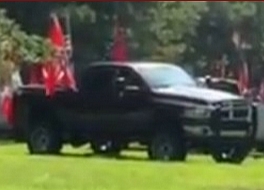 The district attorney of a suburban Georgia town has won indictments against a group of Confederate flag supporters accused of making terroristic threats towards a group of black party-goers.

Not long after the Charleston church shooting that left nine people dead in June, numerous figures in the South rushed to display and defend the flag in the wake of renewed controversy.

On July 25th, four decked-out pickup trucks were caught on video parading by a house hosting a children’s birthday party, where attendees allege they made racially-charged and intimidating gestures towards them.

The Southern Poverty Law Center, representing several of the accusers, said that members of the group were carrying knives, crow bars and guns as they shouted their epithets. Founder Morris Dees said he could not remember when Atlanta ever used the Street Gang Terrorism and Prevention Act against such groups, but said this was a “good use” and wondered why it hasn’t been done before.


Yahoo News reported that the Douglasville Police Department investigated the incident after the video went viral, and the 15 Respect the Flag members are now accused of making terrorist threats. Two members of the group are also facing battery charges stemming from a separate incident at a gas station on the same day.

You can watch the confrontation in the video above, via the Atlanta Journal-Constitution.

Previous Where Is Obama On This? Since ISIS's Next Plan Is Completely Vile & Heinous