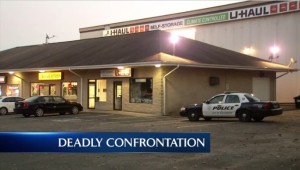 A concealed carry permit holder is being credited with foiling burglary early Sunday morning (10/11/15) when an armed robber entered the Cafe Azzurri in Waterbury, Connecticut.

According to NBC Connecticut, police received reports of gunfire being heard around 2:30 a.m. and when officers arrived on the scene they found a man with at least one gunshot wound at the cafe and pronounced him dead at the scene.

Witnesses at the scene told police that the would-be robber had come into the cafe wielding a gun and tried to steal from the business and the customers. A patron who was “carrying a legally registered handgun confronted the suspect and fired his gun at least once, fatally shooting the man.”

Police confiscated the patron’s handgun and at the present time haven’t released his name until the investigation is concluded, however, no charges have been filed against the citizen who fired the shots.

Police are investigating the fatal incident as a homicide and the patron is cooperating with authorities.

Yet again, we see how a gun in the hand of a law abiding citizen can turn the tables on the criminal element of society and save lives.


Previous [VIDEO] BEN CARSON: "Gun Control Will Cause Next Holocaust"