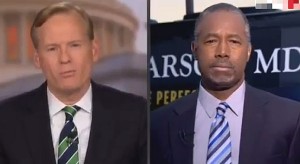 On Sunday Republican presidential candidate Dr. Ben Carson was on CBS’s “Face the Nation” and had a few things to say about the Second Amendment.  “If we have a time when we have the wrong people in office, and they want to dominate the people, the people will be able to defend themselves,” Carson stated.

When asked about passage in his book in which he says confiscating the guns of American citizens would violate the Constitution and render the citizenry vulnerable to criminals and tyrants Carson said, “I’m talking about is the reason that we have a Second Amendment. This is a book about the Constitution, and the Second Amendment is part of it it’s there for the reasons that I stated in the book. In case of invasion by foreign power, the people would be able to aid the military, and also if we have a time when we have the wrong people in office, and they want to dominate the people, the people will be able to defend themselves. As Rep. Daniel Webster (R-FL) eloquently said, ‘the people of America will never suffer under tyranny because they’re armed.’”

CBS host John Dickerson inquired of Dr. Carson, “In your book you say you were once a supporter of a ban on assault weapons and armor piercing bullets, but then you say in the book, you recognize the intent of the Second Amendment which is to protect the freedom of the people from an aggressive government. It sounds like the idea of an overly aggressive government that would require that kind of resistance is a clear and present danger. Do you see it that today?”

Dr. Carson replied by saying, “I didn’t say it was going on right now. I think the implication is quite clear that it is something that can happen, and I listed a number of countries where that happened. The fact of the matter is, if you go to those countries well before it happened and you asked the people if that’s going to happen in their country, they would say, no, it wouldn’t happen here.”


Dr. Carson also said that his using the Nazi analogy is, “not hyperbole at all. Whether it’s on the doorstep or 50 years away, it’s still a concern, and it’s something that we must guard against. That’s one of the real purposes of having a Constitution. I think the Founders were really quite insightful into looking at possibilities and understanding what happened in other places and trying to put together something that would prevent that from happening here. You know, there are a lot of people in the media who will take anything you say and try to make it into hyperbole and controversy, but the fact of the matter is, when you talk to average American citizens, they know exactly what I’m talking about.”

“But the extermination of an entire race, which was the Nazi goal, that’s a pretty big thing to compare our current situation to,” Dickerson observed.

“You do not want to get there,” Carlson concluded.