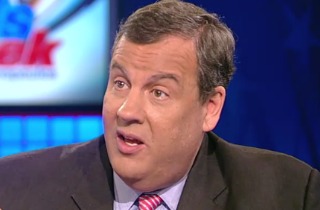 Chris Christie‘s presidential campaign confirmed an incident first reported Sunday morning by Gawker in which the New Jersey governor was kicked off the quiet car on an Amtrak train.

Christie was on a train from Washington, D.C., to New York following his appearance on CBS’ Face the Nation, having what a witness described to Gawker as an “intense phone conversation.” To add to the frustration, Gawker reported that Christie nearly missed the train and did not get the seat he wanted.

“He got on last minute yelling at his two secret service agents I think because of a seat mixup, sat down and immediately started making phone calls on the quiet car,” passenger Alexander Mann told Gawker. “After about 10 minutes the conductor asked him to stop or go to another car. He got up and walked out again yelling at his secret service. He was drinking a McDonald’s strawberry smoothie.”

Mann also said the phone conversation was “intense,” noting that he was harping on phrases such as, “This is frickin’ ridiculous” and, “Seriously?! Seriously?!”

Christie campaign spokeswoman Sam Smith later confirmed the incident to CNN’s Ashley Killough, saying Christie “accidentally” boarded the quiet car. “After breaking the cardinal rule of the quiet car, the Governor promptly left once he realized the serious nature of his mistake and enjoyed the rest of his time on the train from the cafe car,” Smith said. “Sincere apologies to all the patrons of the quiet car that were offended.” 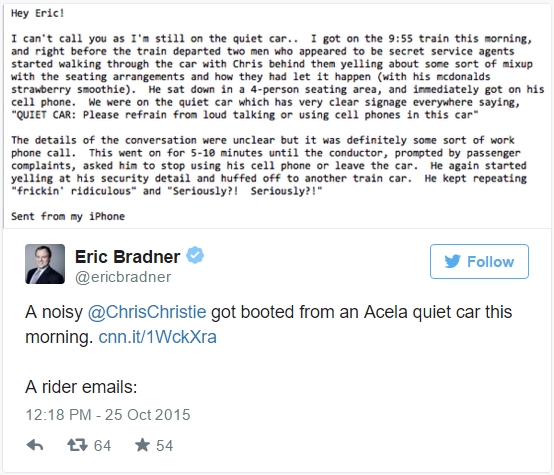 UPDATE — 5:10 p.m. ET: A woman who claims she was sitting next to Christie in the cafe car took to Twitter to dispute the details of the Gawker story: 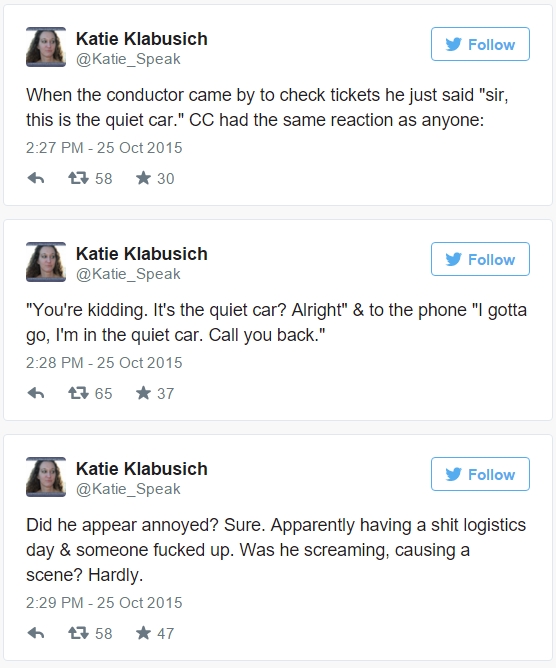