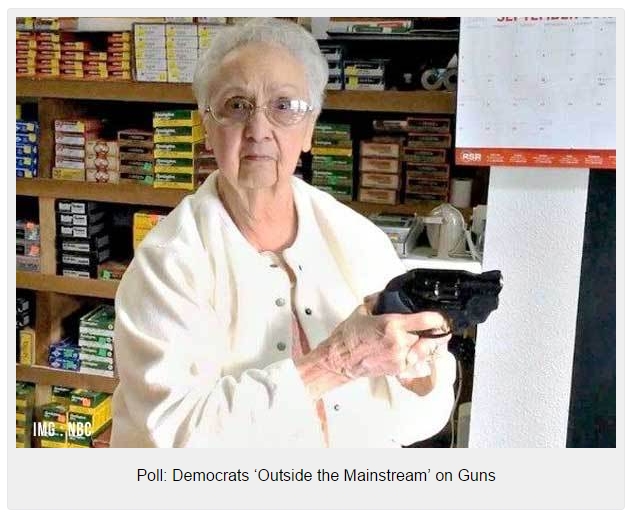 In  a new Wall Street Journal/NBC News poll, the majority of Americans said they see the Democrat Party as “outside the mainstream” on guns.

Ironically, almost an identical majority view the Republican Party as “within the mainstream” as it pertains to guns.

Democrats are pro-gun control and Republicans are pro-Second Amendment.

The Democrat position has been clearly set forward over the past two weeks via presidential hopefuls Sen. Bernie Sanders (I-VT) and Hillary Clinton, both of whom support massive amounts of new gun control. Sanders is clearest on his support for an “assault weapons” ban and new regulations on gun shows. As of late he is also warming to the idea of allowing shooting victims to sue gun manufacturers for the criminal misuse of firearms.


Clinton supports these same positions, plus she wants to go after gun stores, to change the definition of “domestic abuse” to include non-married persons–thereby creating a whole new category of persons banned from gun ownership–and believes the gun control approaches used in Australia are “worth looking at” for U.S. gun policy.

On the other hand, current Republican presidential front-runners Ben Carson and Donald Trump both make clear no new gun controls are necessary. In fact, Carson has been calling for the repeal of gun controls that create the gun free zones mass attackers love to target on school campuses and Trump stresses that “concealed carry is a right, not a privilege.”

It is interesting to note the Wall Street Journal/NBC News poll also shows that the driving force behind any continuing degree of support for gun control is found almost exclusively in the Democrat Party. While just 31 percent of Republicans and 51 percent Iof ndependents voiced support for more gun controls at the point of purchase of a firearm, a full 81 percent of Democrats rallied behind such a proposal.