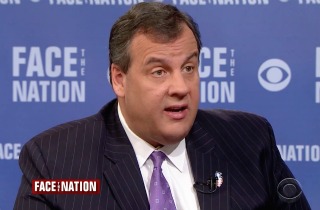 Chris Christie went after President Obama on CBS’ Face the Nation this morning for encouraging “lawlessness” by publicly supporting #BlackLivesMatter.

Obama defended the movement a few days ago when he said that of course all lives matter, but they’re trying to address “a specific problem that is happening in the African-American community that’s not happening in other communities.”

Christie told John Dickerson that kind of rhetoric encourages lawlessness, saying, “I don’t believe that movement should be justified when they’re calling for the murder of police officers.”

Dickerson said that’s only been individual protesters and not the entire movement at large. Christie said “that’s what the movement is creating” and insisted that Obama has never backed up police officers while in the Oval Office.

Watch above, via CBS.

Previous POLL: Democrats ‘Outside the Mainstream’ on Guns