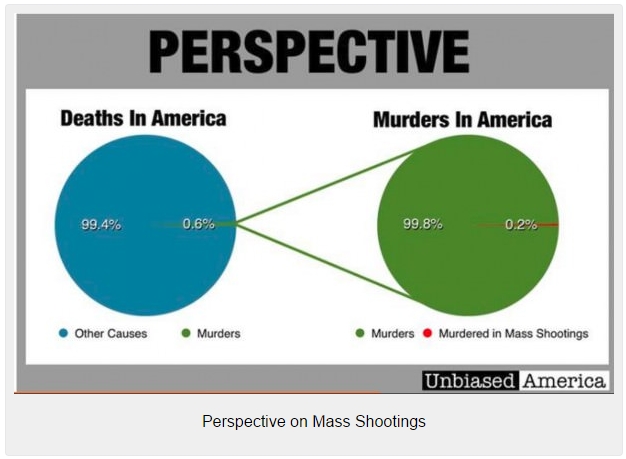 This graphic gives needed perspective on the “epidemic” of mass shootings.  The question an unbiased observer might ask is “Why is such enormous attention given to such a tiny fraction of deaths?

The answer is fairly easy to understand.  The media gains both monetary and political benefits from hyping these shootings.

They gain monetary benefits from increased attention to their programs and advertiser base, but that does not explain why similar mass killings get far less coverage.    Clayton Cramer wrote a paper showing that mass killings with guns gets far more coverage than would be warranted by their numbers.

He explores the political motivations for the media to sensationalize mass shootings.  Though his paper is now 20 years old, it is worth reading to see that the problem was well understood decades ago.

I have not seen a recent study of the amount of time that the old media devote to mass shooting.  But the stated desire of President Obama to politicize the shootings, and the response of the old media to facilitate his desires, is clear.


One of the major reasons that we seem to be having more mass shootings during this administration, is the administration’s and the media’s desire to use those shootings for political purposes.

Progressives call this “manufacturing consent”.   Cramer, in his paper, notes that disproportionate coverage of certain crimes changes the public perception of how much of a danger they are.

In balance, coverage of crimes in our society can be a valuable tool for decision making. In the political realm, the electorate and their representatives may make rational governmental decisions based on news coverage. Individuals, properly informed, can make rational decisions about their personal safety. But when the population has been misled, intentionally or not, about the nature of the crimes in a society, and the rarity or commonality of those crimes, their decision making will be anything but rational. When the coverage is simply endless repetition of apparently meaningless tragedies, the numbing effect described by Rep. Ames doubtless takes its toll on our population today.

The gun control playbook found during a freedom of information act action by the Second Amendment Foundation, specifically directs disarmists to appeal to emotions rather than to logic or reason.

Key principle number two is to “Tell stories with images and feelings…Our first task is to draw a vivid portrait and make emotional connection. We should rely upon emotionally powerful language, feelings and images to bring home the terrible impact of gun violence.” It also advocates the use of images of scary looking guns and shooting scenes to make a point.

The problem with the disarmist approach is that emotional levers only have a short working life.  Once people become engaged enough to actually study the issues, support for more restrictions on firearms ownership falls away.  That is why all the disarmists insist on “acting quickly”.   If they do not get their restrictions through quickly, they will never go through, because they are irrational.

One of the major strengths of the government system in the United States is that it requires deliberation and it is hard to pass legislation quickly.   Big government proponents have learned to short circuit this safeguard by calling everything an “emergency” and by using mechanisms designed to handle emergencies to pass emotional agendas that would never pass otherwise.  That is what Governor Cuomo did  to pass the “Safe” act in New York.

The message of necessity reads: “Some weapons are so dangerous, and some ammunition devices are so lethal, that New York State must act without delay to prohibit their continued sale and possession in the state in order to protect its children, first responders and citizens as soon as possible. This bill, if enacted, would do so by immediately banning the ownership, purchase and sale of assault weapons and large-capacity ammunition feeding devices.”

The problems with emotionally passed legislation has been known as long as the history of the Republic.

Previous [VIDEO] Why Not Muslims and Cop Killers?

Next Jerusalem’s Solution – Everyone Carry Guns