An older sister took to Imgur to share a photo of a quiz that got her 14-year-old sister suspended, and the photo has quickly gone viral.

Last week, a 21-year-old named Jordan Fridman posted a photo of her sister’s answers to a sex education quiz with the caption, “My then 14-year-old sister got suspended for submitting these answers for her sex-ed class. I’m so proud of her.”

The assignment itself asked students to give appropriate answers to reasons why someone’s partner would object to using a condom during sex. While the 14-year-old’s answers are undeniably hilarious, they are also suitable responses to someone refusing to wear a condom. 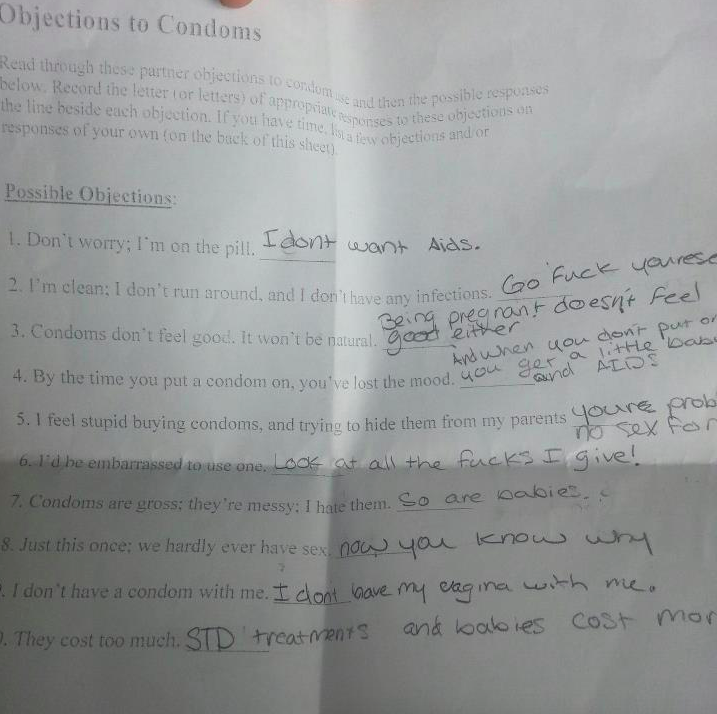 “Don’t worry; I’m on the pill,” the first given example reads.

“Condoms don’t feel good. It won’t be natural,” reads another.

“Being pregnant doesn’t feel good either,” the girl responded.

“Condoms are gross; they’re messy; I hate them,” the seventh example reads.

“So are babies,” the teen quips.

“Just this once; we hardly ever have sex,” another one reads.

“Now you know why,” the girl answers.

While many people seem to think the girl’s answers were appropriate, others pointed out that the language she used, which includes profanities, and the tone of her answers may have been the reason for her suspension.