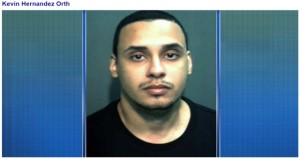 A man accused of posing as a filmmaker to lure girls for child pornography faced a judge over the weekend.

“You are to have no contact with any person under the age of 18,” a judge said. “Next count is cruelty towards a child. Using or allowing a child to engage in sex.”

He said he was a filmmaker with Candy Land Films, but the talent agency couldn’t find any record of the company, so it alerted FDLE.

“Something didn’t seem right to them,” said Jack Massey, the FDLE agent in charge of the case. “They’re the true heroes in this. They are the ones who could have looked the other way, but they didn’t.”

An FDLE agent contacted Orth, posing as the father of a 14-year-old girl.

The agent told Orth he could record video of the girl in a swimsuit for $100, he could video tape her nude for $200 or have sex with her on camera for $400.

Officials said Orth told the agent he planned to sell the recordings, and the agent met Orth at the Westgate Leisure Resort, where he was staying.

The arrest report said Orth told who he thought was the 14-year-old girl’s dad to bring the child to a time-share community in west Orange County and leave her with him.

He also told the undercover agent to bring condoms because he didn’t want her to get pregnant.

Agents discovered Orth was in Orlando around the same time last year, and they believe there could be victims out there.

“Could be a bunch,” Massey said. “This isn’t a guy that this is his first time doing something.”