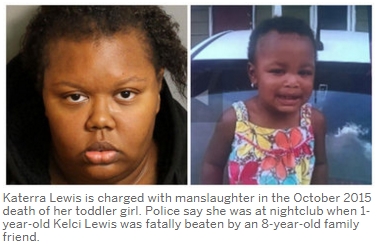 Police in Alabama, have arrested an 8-year-old boy for killing a young girl who he was babysitting while her mother was out partying.

Police said that 1-year-old Kelcia Lewis and her mother, 26-year-old Katerra Lewis, lived with the family of the 8-year-old boy, who has not been named.

He was left to babysit five children, all of whom are younger than him, while his mother and Katerra Lewis, went out to a nightclub.

Police in Birmingham, said that the boy became agitated when Kelcia Lewis did not stop crying. The girl suffered wounds to her head and internal organs as well as bruises on her body.

The 8-year-old boy was charged with murder while the victim’s mother, Katerra Lewis, was arrested on charges of manslaughter because she was reckless in the action by leaving the 8-year-old boy to babysit her 1-year-old daughter.

She was released from the Jefferson County Jail, after posting $15,000 bond.

So far, the mother of the suspect was not arrested, but her children were taken into custody of Alabama Department of Human Resources and Family Services.

Next Woman Arrested For Shoplifting, Confesses To Hiding Drugs In Her Rectum