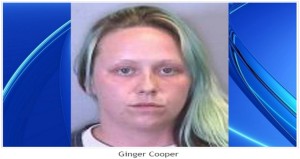 A woman who was arrested for shoplifting at Walmart, told police officers that she hid her friend’s drugs in her rectum, police in Florida said.

Manatee County police said that they have arrested 28-year-old Ginger Cooper, after being caught shoplifting at the Walmart located in 2911 53rd Avenue.

Cooper was charged with one count of shoplifting and one count of possession of a controlled substance. She was booked into the Manatee County jail, and her bail was set at $1,620.

According to the police investigation, on Friday around 2:00 p.m., Cooper took items from the shelves of the store and went to the self checkout section.

She placed the items in her bag without scanning or paying for them. The combined value was $71.27. While being arrested by police, Cooper admitted to having pills in her possession.

A search revealed that Cooper hid three Xanax pills in her rectum. Cooper told police that the pills belonged to a friend who gave it to her to watch them.