Bob Ross’ patient teaching and “wet on wet” painting techniques helped introduce thousands of amateur painters to the art world. The “serious” art establishment might not have had much time for Ross—and the contempt was mutual—but even now, almost two decades after his death, Ross’ iconic show The Joy of Painting still enjoys a large following in syndication. Let’s take a look at five things you might not know about the man who brought us so many happy little trees. 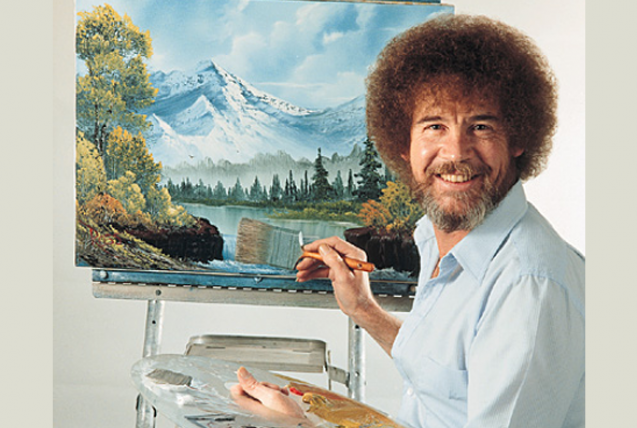 1. HE WAS A MILITARY MAN

Ross’ quiet voice and gentle demeanor made him the perfect host for The Joy of Painting, but those traits might have kept him from being the perfect soldier. Before Ross became a TV painter, he spent 20 years in the United States Air Force and retired with the rank of master sergeant. In fact, an early assignment to Alaska helped expose the Florida native to the snowy mountains and evergreens that would become staples of his art.

Viewers might find it surprising that the serene Ross was an Air Force sergeant, and it sounds like the painter thought it was a little odd himself. He later told the Orlando Sentinel, “I was the guy who makes you scrub the latrine, the guy who makes you make your bed, the guy who screams at you for being late to work. The job requires you to be a mean, tough person. And I was fed up with it.”

When Ross retired from the Air Force, he allegedly vowed never to scream again, a plan that seems to have worked perfectly.

The Joy of Painting ran new seasons on PBS from 1983 to 1994, so even at public broadcasting rates the show must have made Ross quite a bit of loot, right? Not quite. Ross actually did the series for free; his income came from Bob Ross Inc. Ross’ company sold art supplies and how-to videotapes, taught classes, and even had a troupe of traveling art instructors who roamed the world teaching painting. It’s tough to think of a better advertisement for these products than Ross’ show.

How did Ross find the time to tape all of those shows for free? He could record a season almost as fast as he could paint. Ross could bang out an entire 13-episode season of The Joy of Painting in just over two days, which freed him up to get back to teaching lessons.

Next [WATCH] Terrorist Viciously Attacks Man & Then Gets This NASTY Surprise!