One CIA estimate puts ISIS’ total manpower at 31,500, about one-third the capacity of Rose Bowl stadium, or roughly, 0.0019% of the world’s total Muslim population when rounding down to 1.6 billion.

The idea that the remaining 1,599,965,000 Muslims ought to jump on Twitter and condemn ISIS isn’t just silly, it’s a definition of prejudice. But here we are. Another attack, another round of people calling on moderate Muslims to condemn something they had nothing to do with. Or as Mohamed Ghilan tweeted last year: 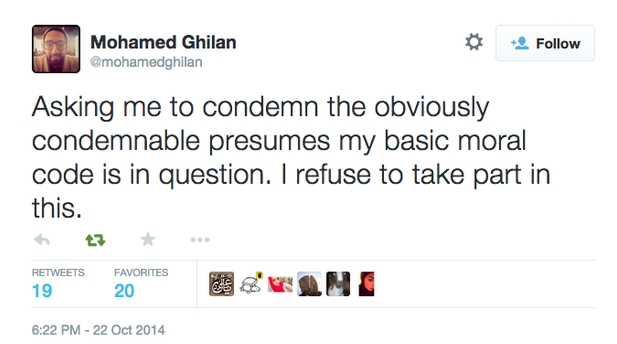 Nevertheless, Muslims from around the world are making it clear ISIS does not represent their values. Iran’s Supreme Leader Hassan Rouhani denounced the attacks, postponing his trip to Europe to renew peace talks on the Syrian conflict. Iran and Iran-backed Hezbollah fight ISIS and other extremists in Syria (as well as non-Salafists). The day before the Paris attacks, militants claiming allegiance to ISIS bombed a civilian area of Beirut in an effort to undermine Hezbollah’s support there.

Joko “Jokowi” Widodo, the president of Indonesia, the largest Muslim country on earth, roundly condemned the attacks, telling reporters, “Indonesia condemns the violence that took place in Paris.” In a now-viral video on YouTube, a Moroccan man expressed his condolences to the victims, saying, “These so-called jihadists only represent themselves.”

Arab states Saudi Arabia, the UAE, Kuwait, Qatar and Egypt have all condemned the attacks, though it should be noted, the unelected rulers who run the Saudi Kingdom and Qatar have routinely funded and armed jihadists in Syria.

The largest Muslim group in the United States, CAIR, quickly condemned the attacks, insisting, “These savage and despicable attacks on civilians, whether they occur in Paris, Beirut or any other city, are outrageous and without justification.” The US Council of Muslim Organizations released a statement also condemning the attack.

Thousands more Muslims took to Twitter to express sorrow, solidarity and solace. A good breakdown can be seen here and here.