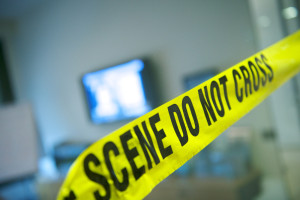 KRMG – A woman entered a guilty plea on Friday, admitting to trying to feed her late husband’s body to birds and leaving his decomposing body in their house.

Ila Solomon of Tippecanoe County, Indiana said her husband, Gerald “Scooter” Gaven, 88, passed away in May 2014 and she let birds pick apart his body, WLFI reports. According to Solomon, Gaven, a World War II veteran, saw his friends’ bodies picked apart by birds on the beaches of Normandy and wanted to go out the same way, WLFI reports.

According to Patch, Solomon profitted from Gavin’s Social Security and pension checks for months after his death, keeping the corpse in the living room “where he decomposed on the carpet and left a wretched stain.”

“I opened up the door so the birds could come in and eat him,” Solomon said in court. “He wanted to see the world again through a bird’s eye view. I didn’t notify anybody. Somebody else did.”


Solomon maintained her spouse died in the spring of 2014, but an autopsy showed he died in 2013, WLFI reports.

Next [VIDEO] This guy COMPLETELY Loses it Over Snow [NSFW]